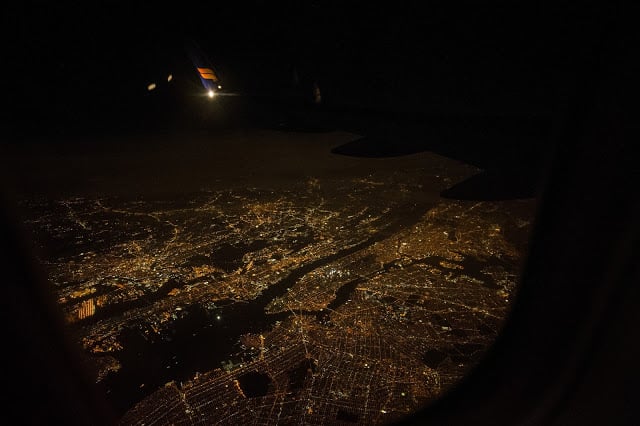 As with any great adventure far, far away from home one must start the traveling portion. “Traveling” husband and I set out to Reykjavik, Iceland from Washington DC along with our good friends Shannon and Jim.  Between the four of us we had an enormous amount of luggage but amazingly they let us all on the plane anyway.  We took off from Dulles International Airport at 8:40 p.m. heading northeast.  We flew over Philadelphia and continued north to Canada before taking a right to Iceland.

Iceland is 4 hours ahead of the East Coast and since the flight was only 5 hours we arrived on the cloud covered island at 6:00 a.m.  Nothing like two hours of sleep on a crowded plane to get your day started!  But who cares when you’re on vacation?

We picked up our rental car and checked into the Hilton Reykjavik Nordica hotel and enjoyed a wonderful buffet breakfast. We quickly discovered Skyr and I declared it my new favorite breakfast, lunch, dinner or snack.  Skyr is an Icelandic cultured dairy product similar in taste to strained yogurt but it’s actually a fresh acid-set cheese.  Skyr is low in fat, high in protein and has been part of the Icelandic cuisine or over a thousand years.  I LOVED it!  It tastes a lot like Greek yogurt – delicious! 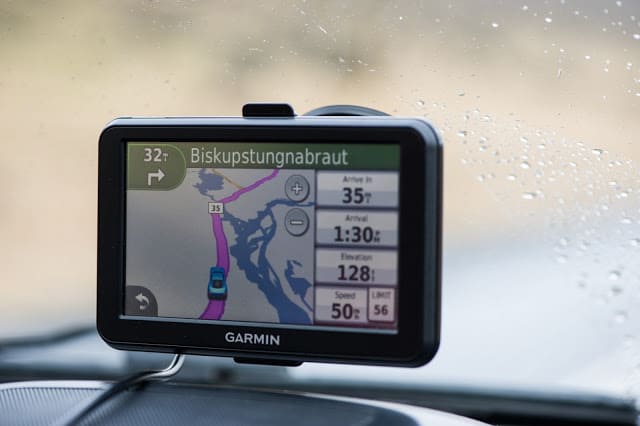 We set up the Garmin, jumped in the rental car and headed out to see the sights.  Yup – I have no idea how to say the name on the screen – good thing most Icelanders speak English!

It was rainy and cold but we all over-packed and came prepared for any kind of weather. 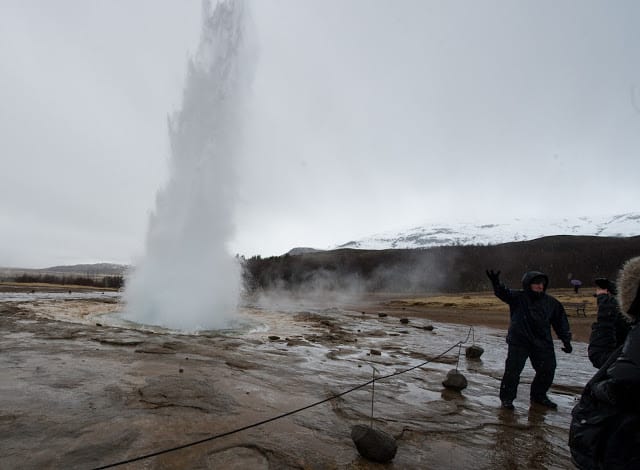 The first stop of the day was the Geysir Hot Springs.  This is one of Iceland’s most famous tourist attractions, (pronounced GAY-zeer) and is the original hot-water spout after which all other geysers around the world are named. 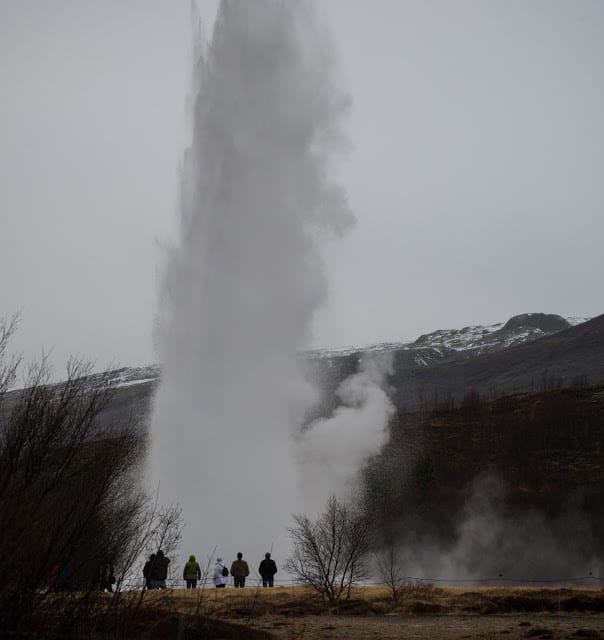 This geyser is named Stokkur and it erupts every 6-8 minutes.  The entire area is covered with smaller colorful springs, bubbling pools with steam vents where geothermally heated water emerges from the ground at 100 degrees. 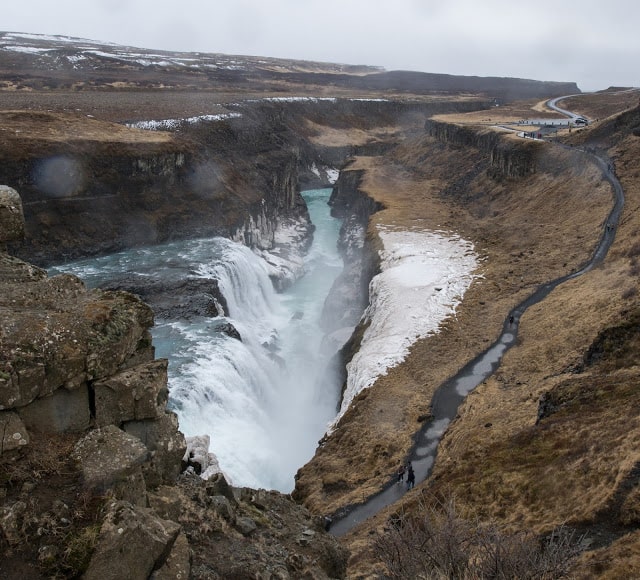 A short distance from the Geysir is Iceland’s most famous waterfall – Gullfoss which means Golden Falls.

Gullfoss has a fascinating history and is absolutely beautiful! 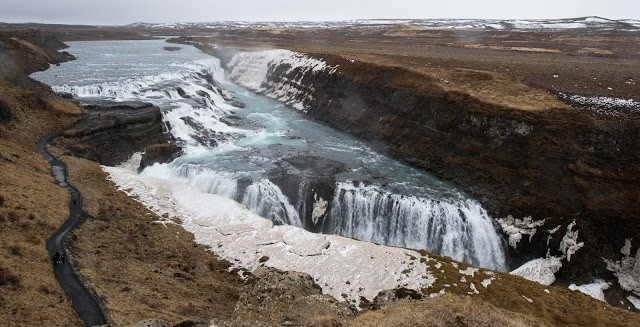 See the tiny people on the bottom left?  This is a huge waterfall and very loud.  The wind must have been 40 miles an hour that day – very, very cold!

The weather started to clear and we headed up the road to the Kerid Volcanic Crater.  There is a tiny person standing on the left of the water.  Everything seems so big in Iceland! 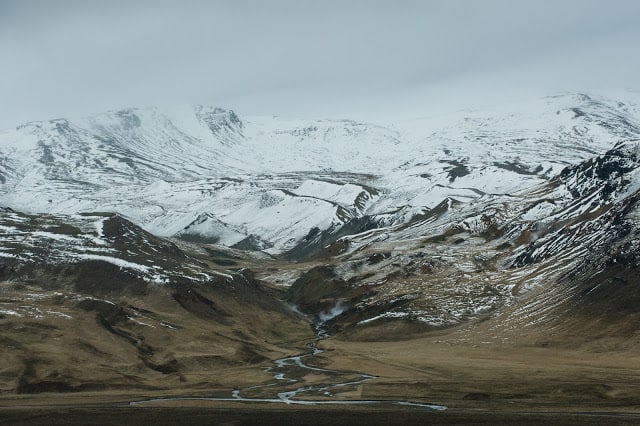 We drove back to Reykjavik stopping along the way to gaze at the mountains, glaciers, hot springs and the North Atlantic Ocean. 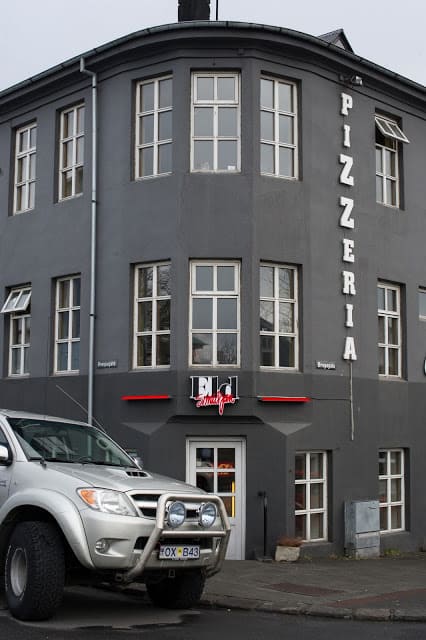 We had dinner at the Eldsmidjan Pizzeria in downtown Reykjavik.

The pizza was fantastic and did not disappoint.  Apparently Icelanders love pizza and hot dogs – so we tried both at the recommendation of a friend who vacationed in Iceland last fall.

During the dead of winter Iceland has only two hours of daylight.  So naturally the summer months are quite the opposite with only two hours of dark/night.  While we were on the island the sun came up about 4:00 a.m. and didn’t go dark until almost 11:00 p.m.  This photo looks like it was taken early in the day – but it was this bright at almost 10:00 p.m.!
I had a major camera malfunction early in the trip so most of the photos were taken by my husband.  I was sick about my camera but started using my iPhone so stay tuned for more photos from both of us!  Day two was beautiful full of fun, sun and adventure with glaciers, waterfalls, black beaches, a traditional Icelandic lunch and new friends.  I’ll get those photos posted as soon as possible but now I need to drag my jet-lagged, tired old self to bed.  Please check back soon for day 2 and thanks so much for stopping by!
Tricia