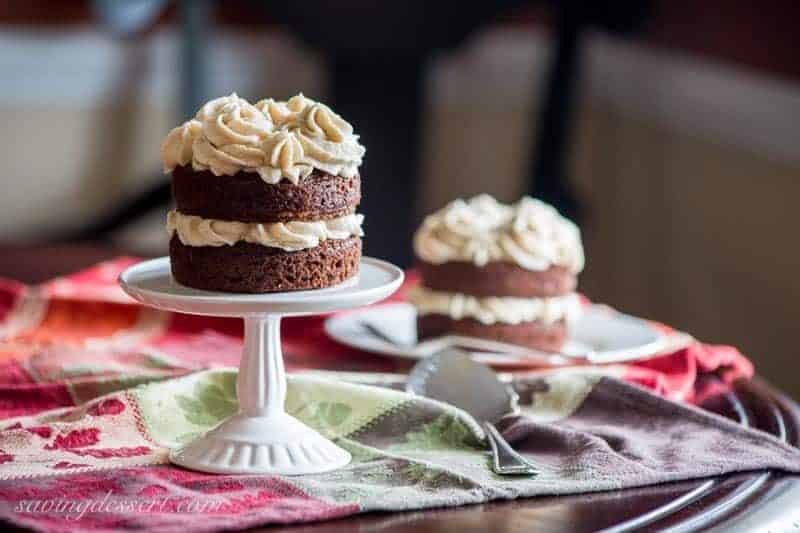 When I was a young woman just starting out on my own, I’d often make Applesauce Spice Cake as my easy go-to dessert.  I baked it in a 13×9 inch pan and added a dollop of Cool Whip on top.  It was so soft and light and tasted of cinnamon and allspice.  Duncan Hines really does have a good cake mix!  But times have changed and now homemade is preferred over boxed or store bought.  Dessert should be special so why waste calories and fat grams on something full of preservatives and artificial ingredients? 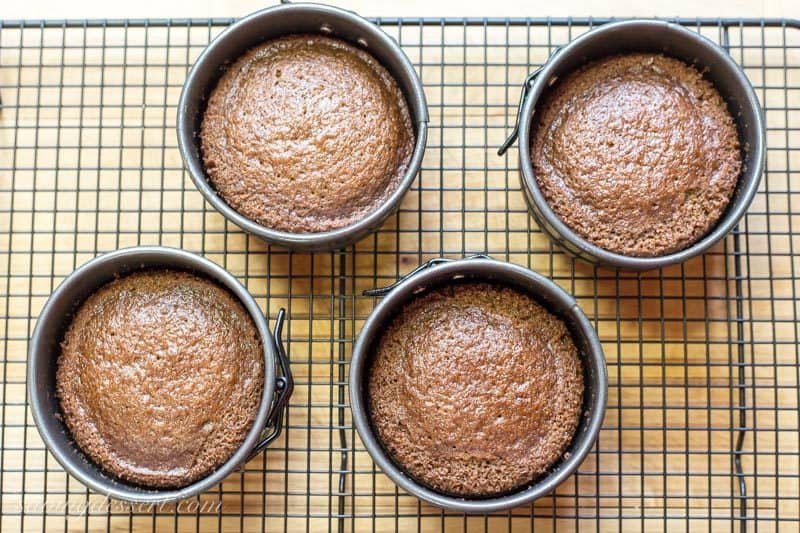 I’ve often looked for a good homemade recipe that would rival my favorite Duncan Hines Spice Cake mix.  But, I don’t need a big giant cake hanging around the house calling my name … “Tricia – come have another piece of cake!”  Does your food call you too?  I hope so – or I’m feeling a little awkward right now!  Sometimes when trying a new recipe I’ll make a smaller version as a test run.  This was a good test run for and a winning recipe for Mini Applesauce Spice Cakes with Browned Butter Cinnamon Buttercream. 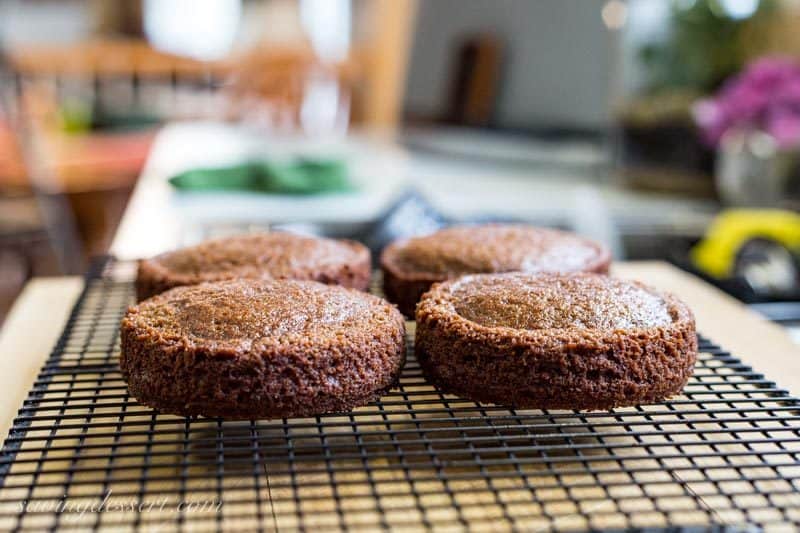 This recipe makes four 4-inch cakes perfect for an individual serving or stacked for a pretty presentation and big enough for sharing.   The cake is moist and light, not at all dense.  The cinnamon and allspice really shine! 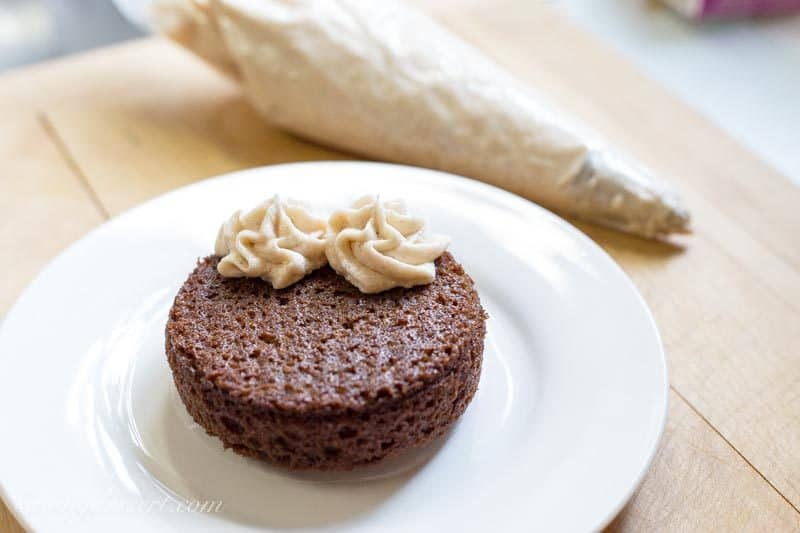 I have six 4-inch springform pans that are perfectly wonderful for a lot of things.  They make nice little cheesecakes, tarts, pies and now little cakes.  These remind me of the cakes I made with my Easy Bake Oven, a long time ago.  Did you have one too?  I was a baker-wanna-be at a very young age. 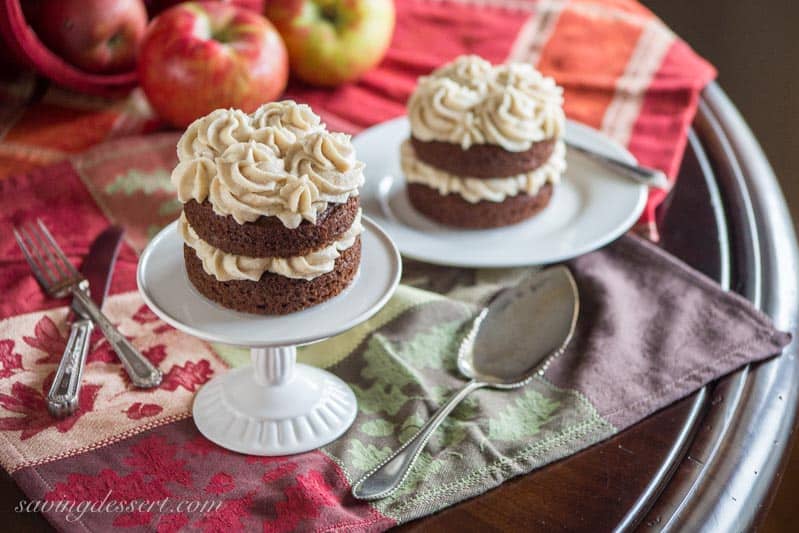 Mini cakes are perfect for gifting too!  Who could say no to a cute little bitty cake? 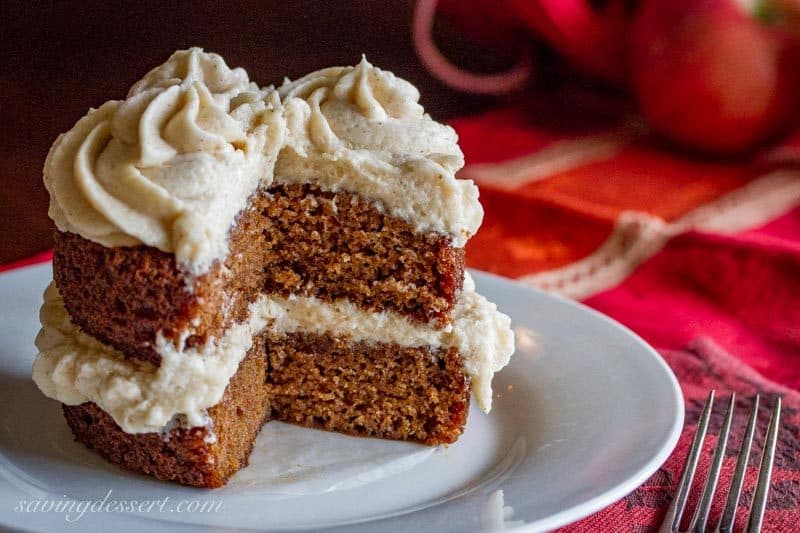 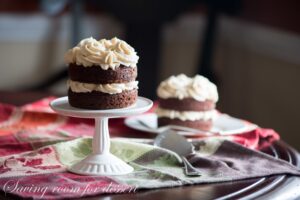 Prep Time: 5 mins
Cook Time: 40 mins
Total Time: 45 mins
Yield: 4
Course: Dessert
Author: Tricia
PRINT RECIPE
Applesauce spice cake has been a fall favorite since the colonial days. This recipe is finished with a rich browned butter and cinnamon buttercream. The recipe can easily be doubled to make a 13x9 sheet cake. Add raisins and / or pecans for a super special treat!

Recipe adapted from Land O'Lakes. Nutrition information is calculated using an ingredient database and should be considered an estimate. When multiple ingredient alternatives are given, the first listed is calculated for nutrition. Garnishes and optional ingredients are not included.

Recipe adapted from Land-O-Lakes Nutrition information is calculated using an ingredient database and should be considered an estimate. When multiple ingredient alternatives are given, the first listed is calculated for nutrition. Garnishes and optional ingredients are not included.

We hope to take a ride up to the mountains this weekend and see if we can find those gorgeous fall colors.  We have to get up early to beat the crowds but our fingers are crossed for good weather and peak color.  We’re also going pumpkin picking with grandson Isaac.  I love this time of year!  What do you have planned?

Thanks so much for stopping by.