Oh man, oh man.  It was a cold and windy long weekend in Chicago!  Our room in the Drake Hotel looked out over Lake Michigan.   The temperatures dropped, the wind kicked up and the water rolled.

We didn’t let a little rain, wind, snow and cold stop us!  We bundled up and took to the streets. 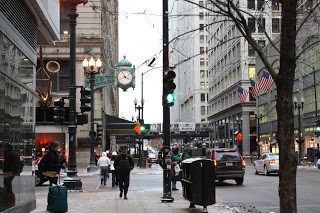 Everybody walks or rides the ‘L’, the elevated train you can see in the photo.

Macy’s has some big Christmas decorations! 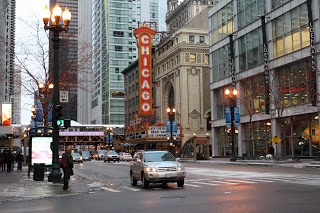 I was so impressed by the people in Chicago.  They are very friendly and fit!
I didn’t realize there are so many urban dwellers.
Everybody lives downtown, at least the young and pretty people do. 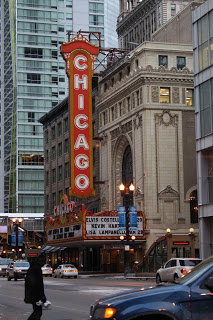 I think Jerry Seinfeld tickets were on sale for the Chicago Theatre.
We didn’t go inside but I bet it’s pretty. 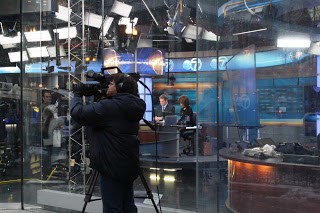 We were walking along and happened upon the 4:00 p.m. ABC local news broadcast.
See the little anchor people?

Weather dude was doing a live shot talking about how cold it was.  Duhhhh!  Freezing I tell ya.

I think he was wishing they would let him come back in and sit at the desk. 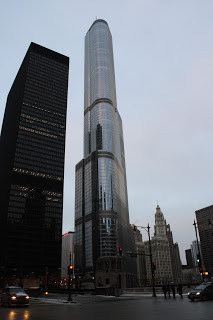 This building was actually in a couple of movies.  One starred Steve McQueen and I believe it was “The Hunter”.  McQueen played professional bounty hunter Ralph “Papa” Thorson.   Anyway he (or his stuntman) drove a car off this garage into the Chicago River.  All the cars you can see are backed into the parking spaces.  I would not have the nerve to even drive inside that building much less park a car by backing into a space! 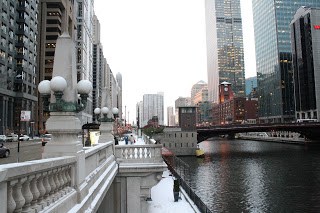 It really is a beautiful City but with the sun going down, it was getting colder by the minute.
We wanted to do the riverwalk below, but the snow had frozen into ice and I didn’t feel like a swim.

Michigan Avenue is lined with stores, restaurants, shoppers and lights in the trees 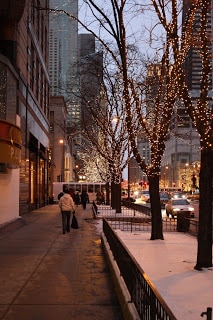 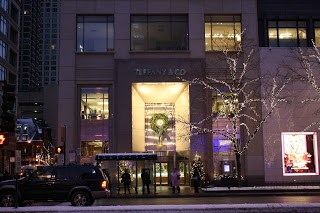 I asked my husband, since it was our 25th wedding anniversary, if he needed to stop in Tiffany’s.
No, we didn’t shop there. 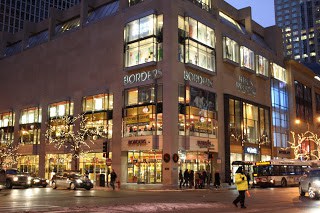 But we did shop here!  This Border’s lost their lease and had everything 40-50% off.  I found the very last copy of The Pioneer Woman’s Cookbook in the store.  It was on my Christmas list anyway!  So I read it on the plane home and found many recipes I will have to try soon. 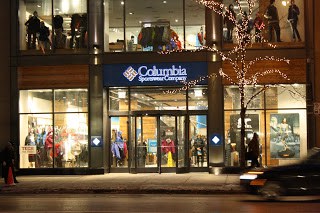 I bet this store gets the business since everybody in Chicago needs proper winter clothing. 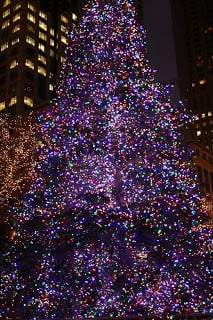 This gorgeous tree was at the base of the The John Hancock Building. 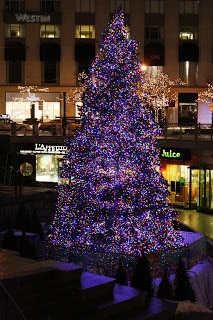 We tried to figure out how they had so many lights on such a giant tree. 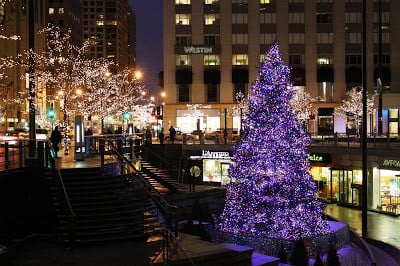 We had breakfast at a small cafe just beyond this tree.  Great warm breakfast panini sandwiches – yum!
We also stopped in and had a white hot chocolate. Also very yummy. 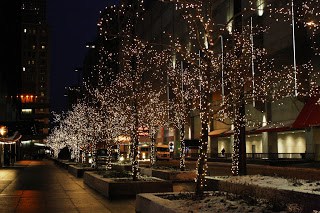 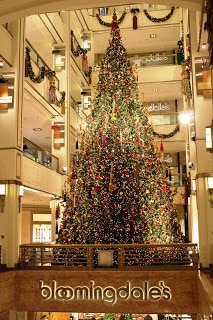 Across Michigan Avenue there was an upscale mall in the 900 Building.
This incredible 4+ story tree was something to behold.
We didn’t get a picture but they had an open kiosk-type vodka bar right in the middle of the Mall.
I assume most of the shoppers live nearby and can stumble home instead of driving.
If I drank vodka and shopped at the same time, I would surely exceed everybody’s budget. 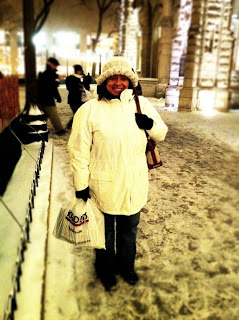 I was very bundled up for the evening walk to Borders 🙂 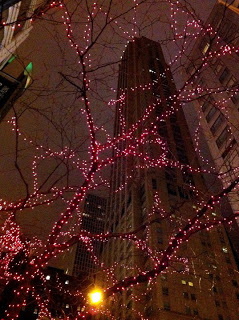 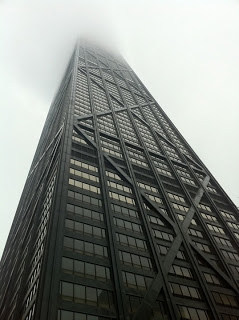 This is the John Hancock Building during daylight hours.  We still couldn’t see the top. 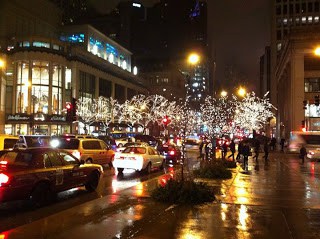 Everything was decorated for Christmas.

Even a neighborhood bar had more than it’s share of Santa activity!
This really was an interesting group.  I tried not to make eye contact – he he 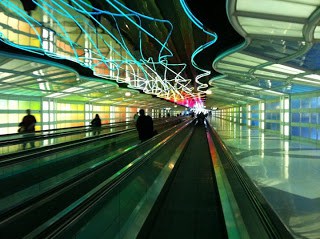 My wonderful photographer husband took this and many of the other photos posted today.
This was in the Chicago O’Hare airport the day before Ree, The Pioneer Woman, came through and took the exact same photo while changing planes from New York.  They both have a great eye! 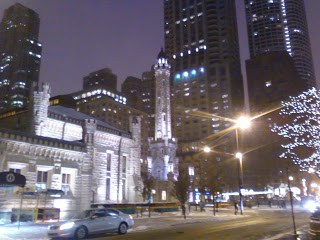 This historic Water Tower Building and adjacent Pumping Station were the only two buildings to survive the great Chicago fire of 1781 which destroyed the entire city.
We spent a good deal of time at an outdoor Christmas market.  Check back tomorrow for abundant photos of the fun!  Thanks so much for stopping by.  Stay warm!  Tricia

An Adventure in Iceland – Part 1