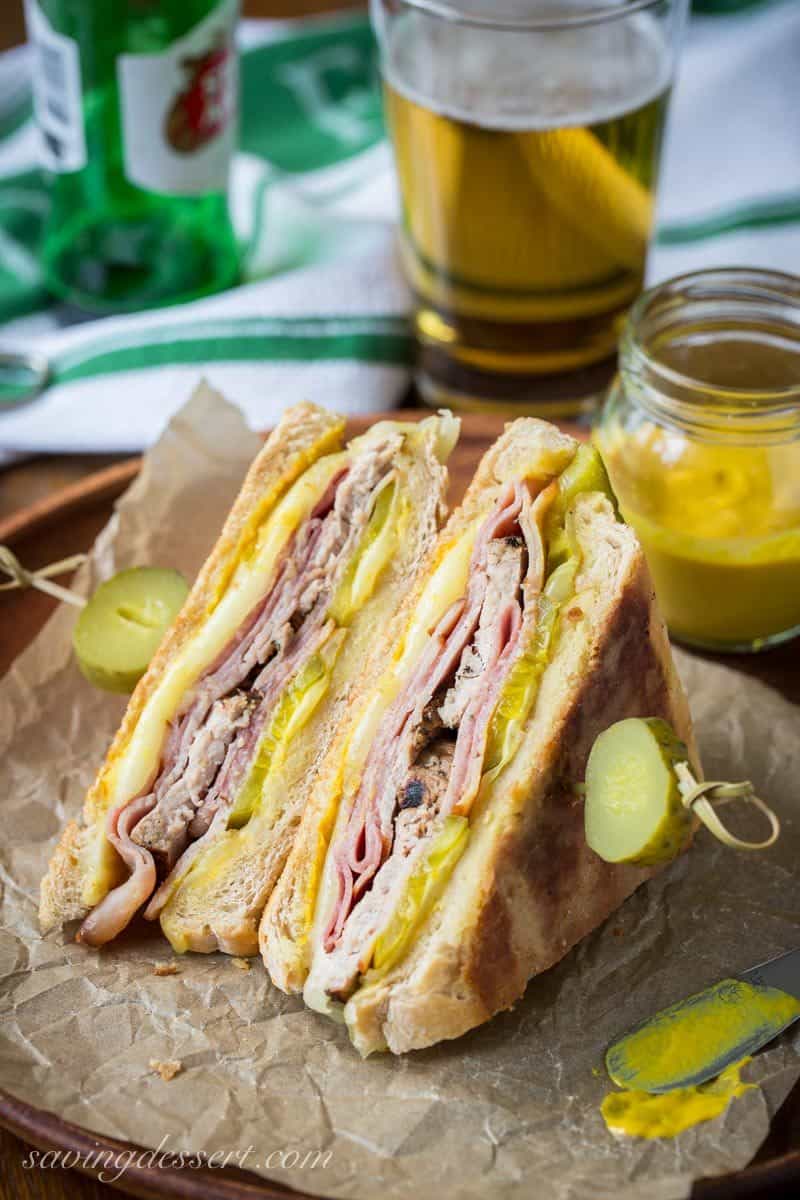 A hearty and delicious combination of flavors and textures

The original Cuban sandwich was invented in a Key West Florida cafe popular with local Cuban workers. However that first Cubano sandwich was made with salami instead of ham which later became the standard.

There are may variations of this sandwich but this is without a doubt one of our favorites. 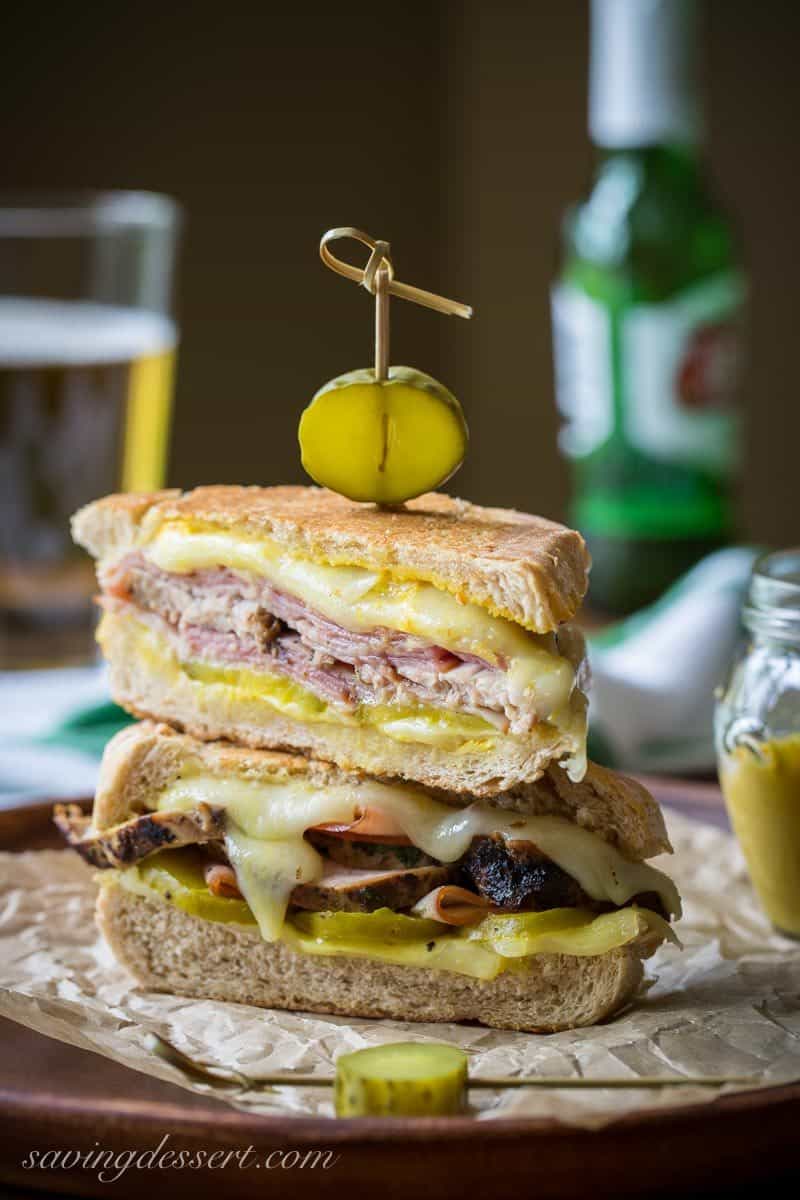 You probably knew this amazing sandwich would be the next after posting the wonderful, flavorful Grilled Cuban Mojo-Marinated Pork Tenderloin last week. This easy and delicious overnight marinade is loaded with powerful flavors from the garlic, lime, orange juice and herbs.

The lime juice and citrusy garlic marinade adds incredible flavor to the pork and to this sandwich. As you’ve probably guessed, this hearty sandwich is loaded with meat and cheesy goodness so nobody goes away hungry! 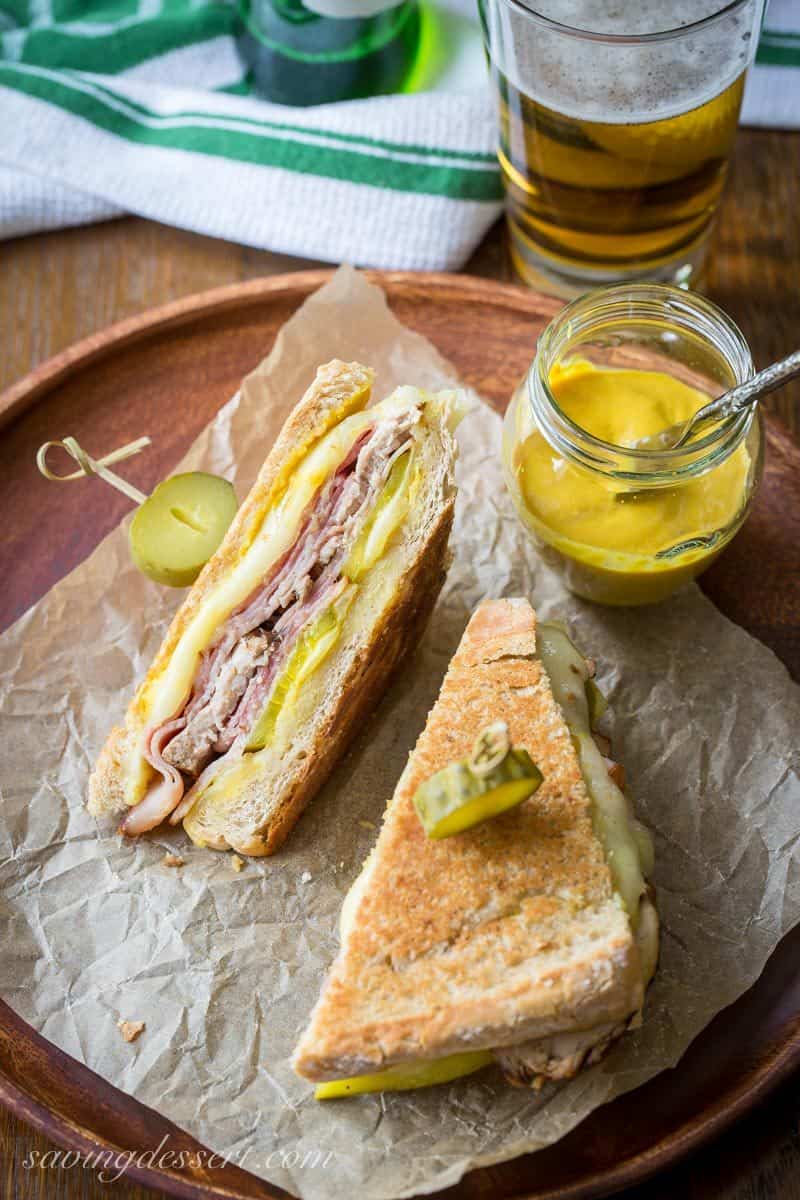 How to make a Cuban Sandwich

Since real Cuban bread is almost impossible to find, pick up two 12-inch long loaves of soft white French bread or Italian bread or make your own at home. First, remove the top and bottom crust from the loaf of bread and cut in half so you have four 6-inch pieces of bread.

Cut each portion of bread in half lengthwise. Next lightly spread butter on the top and bottom sides that will be grilled. You should have 8 pieces of buttered bread. Turn the pieces butter-side down on a large baking sheet.

Generously spread mustard on the inside of each of the 8 slices of bread. Layer 1 slice of Swiss cheese over the mustard on 4 of the bottom halves. Divide the pickles, ham and pork over the Swiss cheese. Sprinkle salt and pepper over the sandwiches if desired.

Top with another slice of Swiss cheese and then the top of the bread, butter side up.

Finally preheat a large non-stick skillet over medium heat. Coat the pan with a little olive oil before grilling if desired. Add the sandwiches then turn the heat down slightly. Continue cooking until the bottoms are lightly browned.

Carefully turn the sandwiches over and “firmly press” the Cuban using a heavy skillet, cast iron skillet or aluminum foil wrapped bricks. Don’t be afraid to press firmly. Continue cooking until the cheese is melted and both sides are golden brown.

The skillet works well however if you have a panini press or grill pan that will work well too. This sandwich is perfect made on our Blackstone griddle. It’s our favorite way to cook while camping!

Repeat with the remaining sandwiches cooking on both sides until golden brown. Cut the sandwiches in half diagonally and serve with chips and a cold beer if desired. 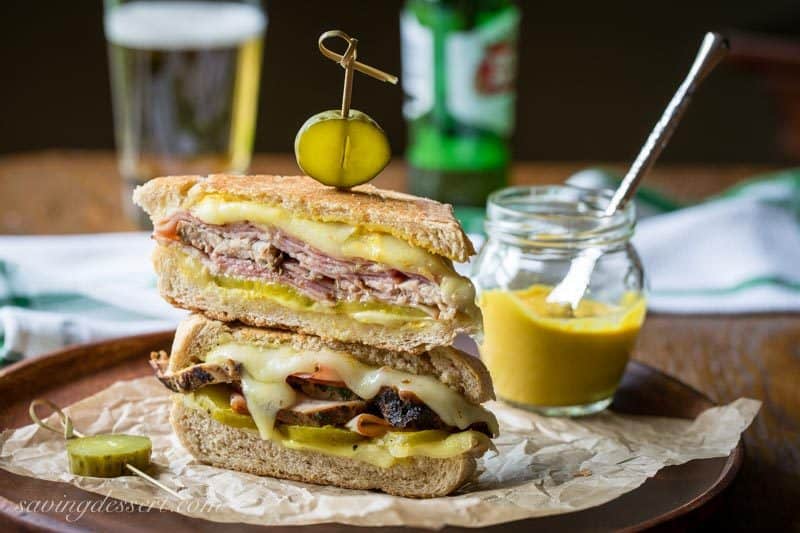 If you’ve traveled in the Tampa or Miami area perhaps you’ve had a great Cuban sandwich.

Sounds like summer perfection to me! However if you don’t want to go all the way to Florida or Cuba to enjoy a terrific Cuban sandwich, I’ve got your recipe right here!

Serve with chips, rice or beans and a nice cold bubbly drink. 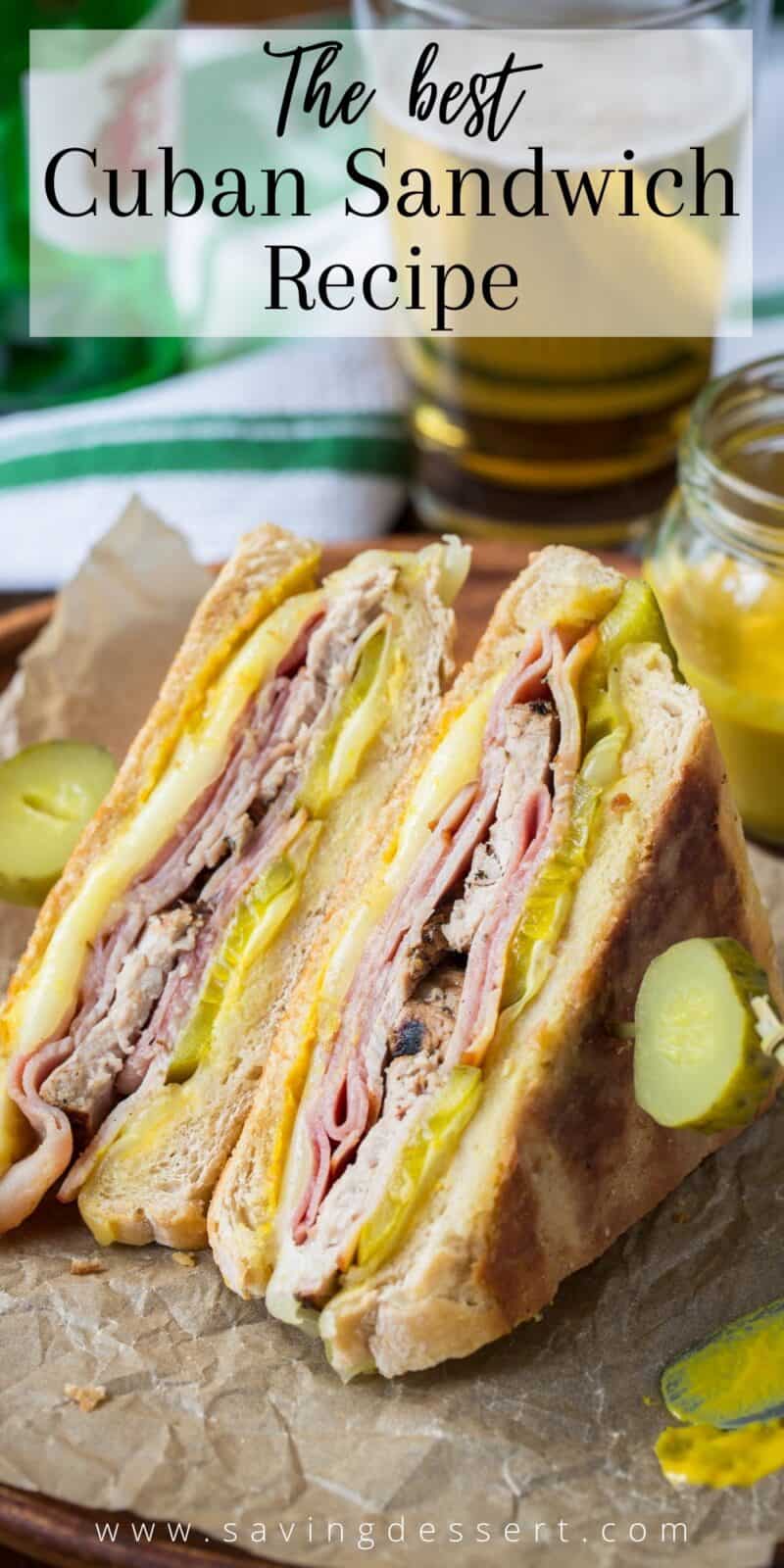 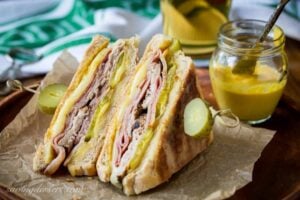 Soft white sub rolls will also work in this recipe. Feel free to use a panini press if you have one.

The Cuban is a pressed or grilled sandwich typically made with Cuban bread similar to French or Italian loaves.

We usually pick up a few small Italian loaves to use in this recipe. Although, to make the bread easier to press and grill I trim off the tough ends and top and bottom crusts.

Don’t get hung up on having the right kind of bread to make this iconic sandwich. If it’s soft, white, thick and delicious, it’s going to be great.

We also love the occasional sandwich and especially a meaty one with cheese like this Cuban. It’s a nice splurge that completely satisfies, plus it’s easy to make, too.

This sandwich is perfect for casual entertaining.

You can easily prepare each of the components ahead of time and simply assemble the sandwiches just before cooking. After that all you need to do is gave a few bottles of good beer on ice and extra pickles and chips on hand. Done and done!

There’s something about a classic sandwich that keep me coming back for more. For instance, these Homemade (Baked) Chick-Fil-A Sandwiches have been on my list of must-make recipes forever!

And finally another crazy delicious ham & cheese variation is this Monte Cristo Sandwich. This makes an amazing breakfast sandwich too!