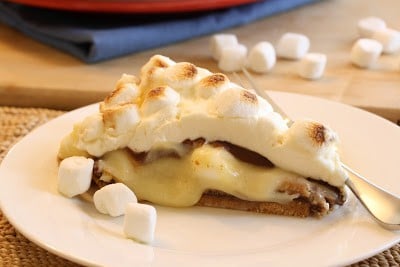 I bought a new cookbook titled Perfect Pies by Michele Stuart.  Michele is without a doubt, America’s Pie-Baking Champion.  I was thrilled to choose a couple of pies to make and the first one on my list was the S’Mores Delight Pie.  We just bought a camper last weekend and I’m in the mood for fall camping with a camp fire, cool evenings and s’mores!  I didn’t even give it a second thought when I read the recipe is defined as “challenging.”  I’ve made hundreds of pies in my life, this doesn’t scare me!  Little did I know that challenging, really means challenging 🙂  I’m not saying it’s impossible, I’m saying I would make some changes.  I’ll post the recipe as written but add my suggestions at the end of this post.  Be brave – don’t let me scare you! 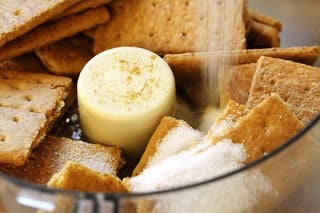 First make a basic graham cracker crust.  I used one sleeve of graham crackers and 1/8 cup of sugar.  Pulse in the food processor until crumbly. 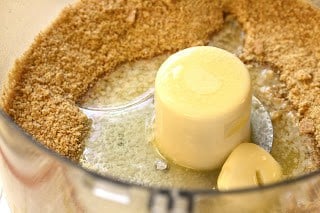 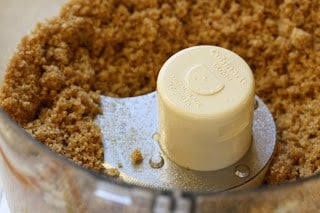 Pulse again until all ingredients are blended. 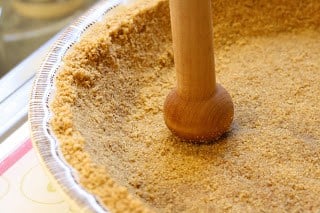 Press the graham cracker mixture into the bottom of a 9-inch pie plate and bake at 350 degrees for 5-6 minutes or until lightly browned and set. 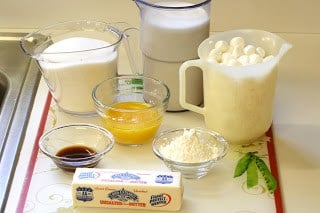 While the crust is cooling we will make the marshmallow vanilla cream filling.  You will need sugar, cornstarch, salt, whole milk, egg yolks, unsalted butter, vanilla and mini marshmallows. 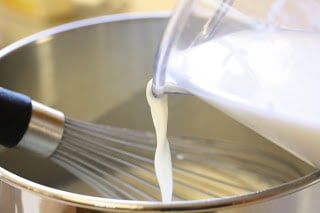 In a medium saucepan, whisk together the sugar, salt and cornstarch.  Slowly add the milk and egg yolks whisking until combined.  Cook over medium heat whisking constantly until the cream starts to boil and thicken. 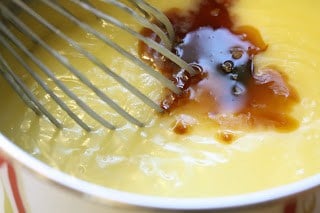 Once the cream is very thick, add the butter one tablespoon at a time blending well after each addition.  Whisk in the vanilla and remove the vanilla cream from the heat.  Cool the mixture for about 10 minutes. 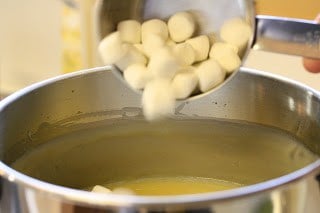 Stir in one cup mini-marshmallows. 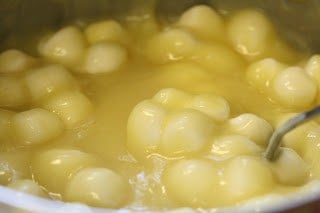 Blend until the marshmallows are melted. 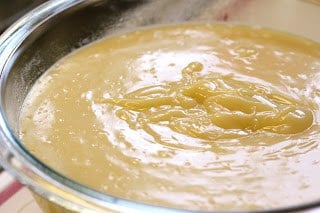 Pour the marshmallow cream into a bowl and refrigerate for about 1 1/2 hours until mixture is completely cool. 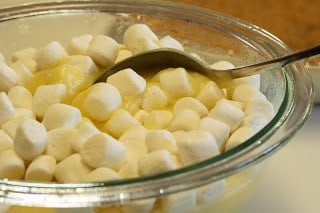 Add one more cup of marshmallows to the cooled cream mixture and blend well.  Set aside.

You will also need a hot fudge sauce as the bottom layer.  I used Michele’s recipe and made it homemade.  I would image you can use a good quality store bought fudge sauce if you want to skip this step but the fudge sauce is easy to make and very yummy!  I made it the night before assembling the pie and was very pleased with the results.  Check the recipe below for the step-by-step instructions. 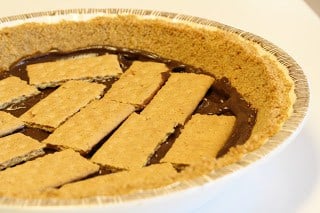 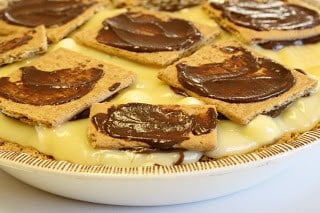 Dip 6 more graham crackers in the remaining 1/2 cup fudge sauce and arrange them over the marshmallow cream.  Refrigerate the pie for 12 hours before continuing to the next step. 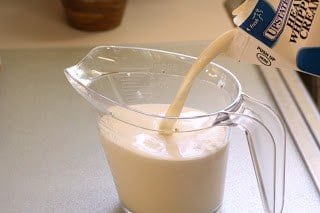 This is the part of the recipe where I think you should just trust your instincts.  I was asking myself, Tricia, how are we going to put toasted marshmallows on top of whipped cream?  Won’t it melt?  We’ll get to that in a minute. 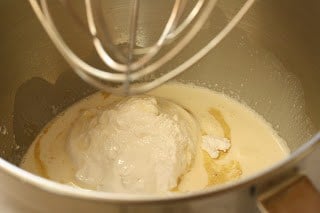 But what the heck.  I decided to following the recipe and made the whipped cream topping mixed with marshmallow fluff. 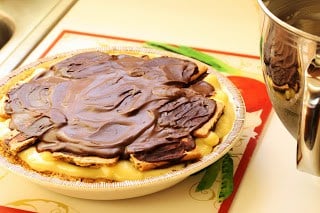 I added a little more fudge sauce on top to fill in the cracks between the graham crackers. 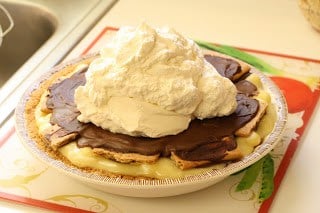 Then top the pie with the whipped cream fluff mixture.  Again, I’m asking myself how this is going to work. 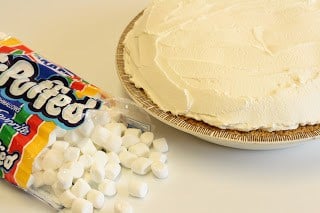 I spread the whipped cream to cover the pie. 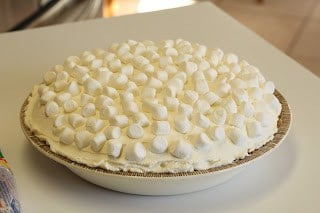 Then add mini-marshmallows to cover the top.  The recipe only called for 1 cup of mini-marshmallows.  I know I used two cups and still didn’t get it completely covered.  Do you know what happens to whipped cream when you put it under the broiler?  I guess you don’t have to be smarter than a 5th grader to know the answer to that question!  It really does melt, and drip and make a big sticky mess.  I guess this is the s’mores part – gooey and sticky and melted. 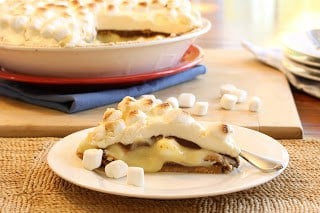 I’m complaining because it didn’t turn out as pretty as I had hoped.  But it is ‘pretty’ delicious.  My son’s best friend Daniel said it was one of the top pies I’ve made this year.  He had seconds, which were served in a bowl 🙂  I guess if I ever made this again, I would skip the bottom crust and make the whole thing in a trifle bowl.  It reminds me a little of banana pudding.  With that in mind maybe it would have been easier made more sense to use meringue and marshmallows instead of whipped cream.  At least meringue and marshmallows brown instead of melt. 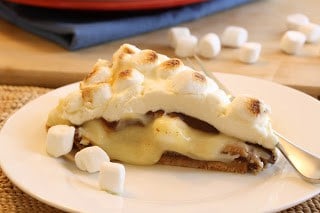 I can see this being served at a Halloween party.  I can see leftovers going with us on a camping trip. 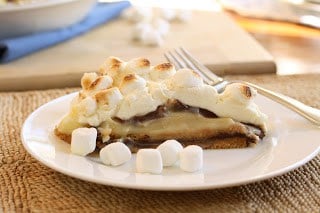 I don’t think the challenging level scared me enough.  Now I’m mad and just want to make it again with meringue this time!  This pie was not a dud, it’s just best served in a bowl.
S’Mores Delight Pie
(recipe by Michele Stuart as published in Perfect Pies)
Level:  Challenging  (trust your baking instincts!)
Crust:
1 1/2 cups crushed graham crackers
1/8 cup sugar
5 tablespoons melted, unsalted butter
Mix the ingredients together until well blended.  Press into the bottom of a 9-inch pie plate and bake at 350 degrees for 5-6 minutes.  Cool
Marshmallow Vanilla Cream:
1 3/4 cups plus 2 tablespoons sugar
3 1/2 tablespoons cornstarch
1/8 teaspoon salt
2 1/2 cups whole milk
4 large egg yolks
2 tablespoons unsalted butter
2 teaspoons pure vanilla extract
2 cups mini-marshmallows
In a medium saucepan, whisk together the sugar, cornstarch and salt until blended.  Slowly whisk in the milk and egg yolks.  Whisking constantly, bring the mixture to a boil over medium heat. Cook until the mixture becomes very thick.  Add the butter one tablespoon at a time, mixing until completely melted after each addition.  Blend in the vanilla extract and remove from heat.  Allow the vanilla cream mixture to cool for 10 minutes.  Stir in one cup of mini-marshmallows until melted.  Pour the marshmallow cream into a bowl and cool in the refrigerator for 1 1/2 hours.  Fold in the remaining one cup of marshmallows and set aside.
Hot Fudge Sauce:
(If using this fudge sauce, make one day or more in advance)
Recipe makes 4 cups sauce
1 cup sugar
3 cups heavy cream
1/4 cup light corn syrup
4 ounces unsweetened chocolate
4 tablespoons (1/2 stick) salted butter
1 tablespoon pure vanilla extract
Combine the sugar, cream, syrup, chocolate and butter in a medium saucepan.  Bring the mixture to a boil over medium-high heat.  Cook whisking constantly for about 5 minutes, or until the sauce begins to bubble.  Remove from heat and add vanilla.   Cool mixture before refrigerating.  The sauce will thicken as it cools.  Hot Fudge Sauce can be kept refrigerated in an airtight container for approximately 2 weeks.
S’mores Filling:
1 cup Hot Fudge Sauce (recipe above)
12 graham cracker squares
1 cup mini marshmallows
2 cups Fluff Whipped Cream (recipe below)
To assemble the pie, pour 1/2 cup hot fudge sauce over the bottom of the graham cracker crust.  Place 6 graham cracker squares on top of the fudge.  Pour the marshmallow cream over the graham crackers.  Spread the remaining 6 graham crackers with the remaining fudge sauce and arrange them over the marshmallow cream.  Refrigerate the pie for at least 12 hours.
Fluff Whipped Cream
1 cup heavy whipping cream
1/8 cup confectioners’ sugar
1/2 teaspoon pure vanilla extract
1/4 cup marshmallow cream (or marshmallow fluff)
Place a metal bowl in the freezer to chill 15 minutes before making the whipped cream.  Combine the heavy cream, sugar, vanilla and marshmallow cream in the chilled bowl.  Blend on low for 1 minute then turn the mixer up to high until stiff peaks form.
Remove the pie from the refrigerator and spread the Fluff Whipped Cream evenly over the chocolate fudge layer.  Arrange 1 cup mini-marshmallows over the entire surface of the pie.  Place the pie under the broiler until the marshmallows turn a golden campfire color, rotating the pie frequently for an even finish, about 2 minutes.  Serve immediately or refrigerate until ready to serve.
~~~~~~~~~~~~
I’d like to offer some suggestions.  Make sure the vanilla cream is really thick before removing it from the heat.  Once you stir in the marshmallows it thins the mixture.  You’ll need a lot more than 1 cup of mini-marshmallows to cover the top of the pie.  I would use meringue with marshmallows instead of whipped cream.  Whipped cream melts once exposed to heat.  Unless you really want to make a pie, assemble this in a trifle bowl instead of a pie plate.  It will be just as good and you could use whipped cream as the topping without heating.  Or, layer it in a casserole and bake with meringue and marshmallows on top.  Also one more tip, make the entire recipe of Hot Fudge Sauce and save any left overs for other uses.  It is tasty!
Thanks so much for stopping by.  I’m not giving up on Michele’s pies and will try another from her cookbook.  Can you believe I’ve posted 42 pies already?  If you haven’t had a chance to check out the Pie Page be sure to do so!  Only 10 more to go.  I’m getting excited!
Have a lovely week.
Tricia