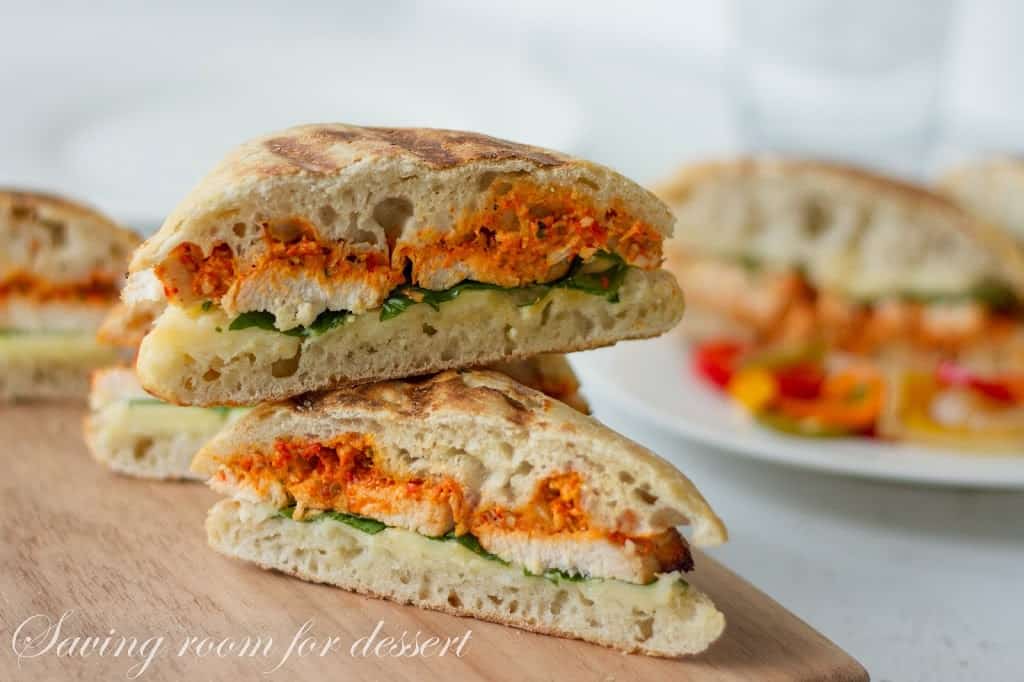 While this sandwich was deliciously amazing, the red pepper pesto is the real star.  I am just kicking myself for not doubling the recipe.   I’m not even a big fan of red bell pepper – but I love this fiery spread! 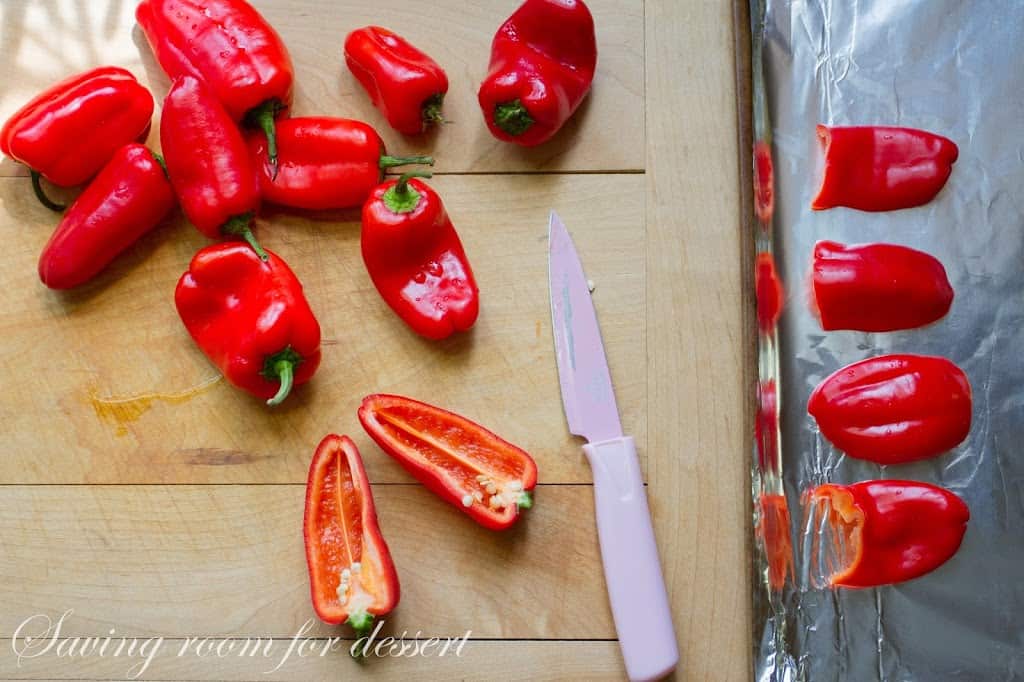 This recipe adapted from Whole Living has been on my mind a long time so I was thrilled to give it a go.  I had a few leftover peppers from a recent batch of Pickled Peppers but you can use whole large red bell peppers instead of the mini’s.  I ended up using about a dozen mini reds.  Remove the stems and seeds and cut them in half.  Lay the peppers cut side down on a foil lined baking sheet. 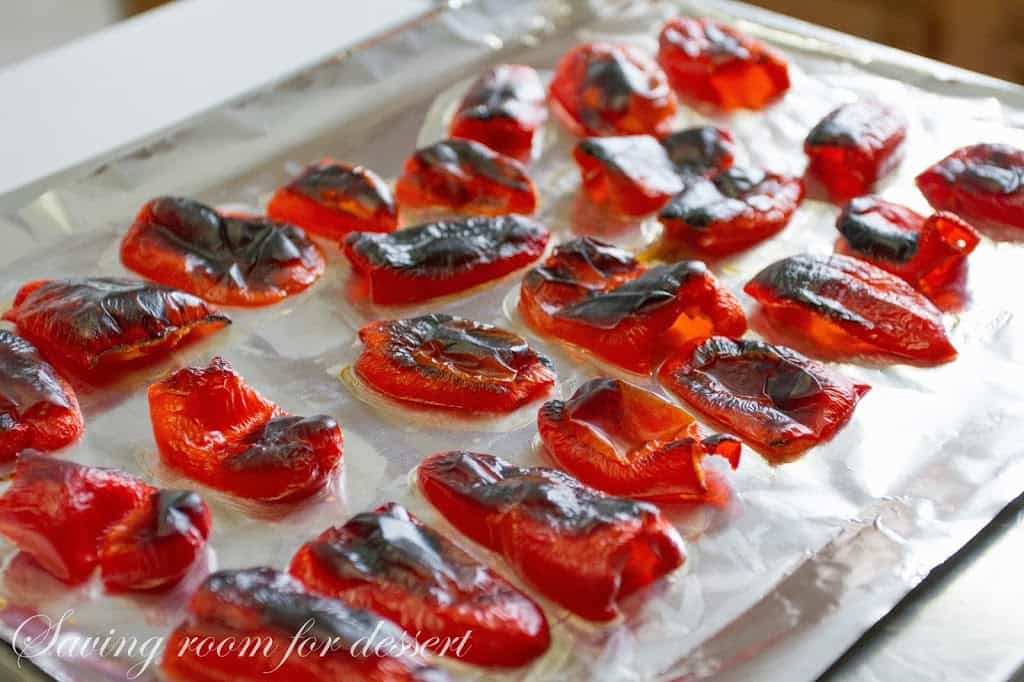 Broil the peppers about 8-10 inches from the heating element, so they cook a little before scorching.  Toss the blackened peppers into a paper bag and close the bag to seal.  Let them steam for about 10 minutes or until the skin is loose and easily removed. 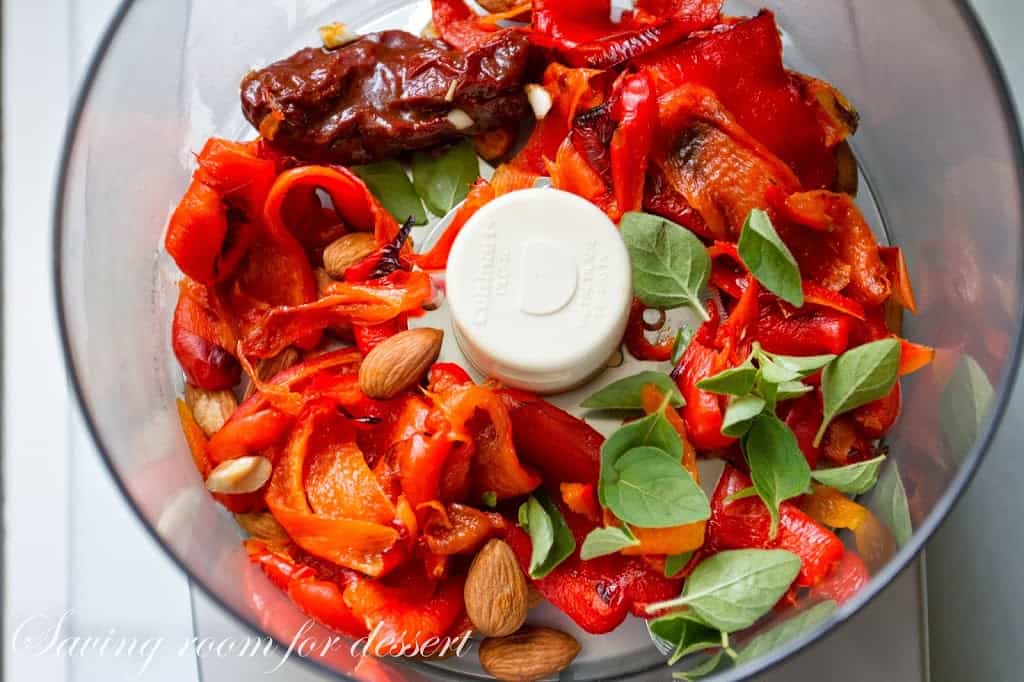 Remove most of the burnt skin and discard.  Add the peppers to a food processor and throw in 1 jarred chipotle pepper in adobo sauce, garlic, almonds, and fresh oregano.  Process until coarsely chopped.  Drizzle in 2 tablespoons olive oil and process again until combined.

Assemble the sandwiches by spreading a generous amount of pesto on one side of the sliced bread (I should have spread it on both sides!)  I used small ciabatta rolls, sharp white cheddar cheese, leftover grilled chicken breasts and fresh spinach.  Grill each sandwich until lightly browned and the cheese slightly melted. 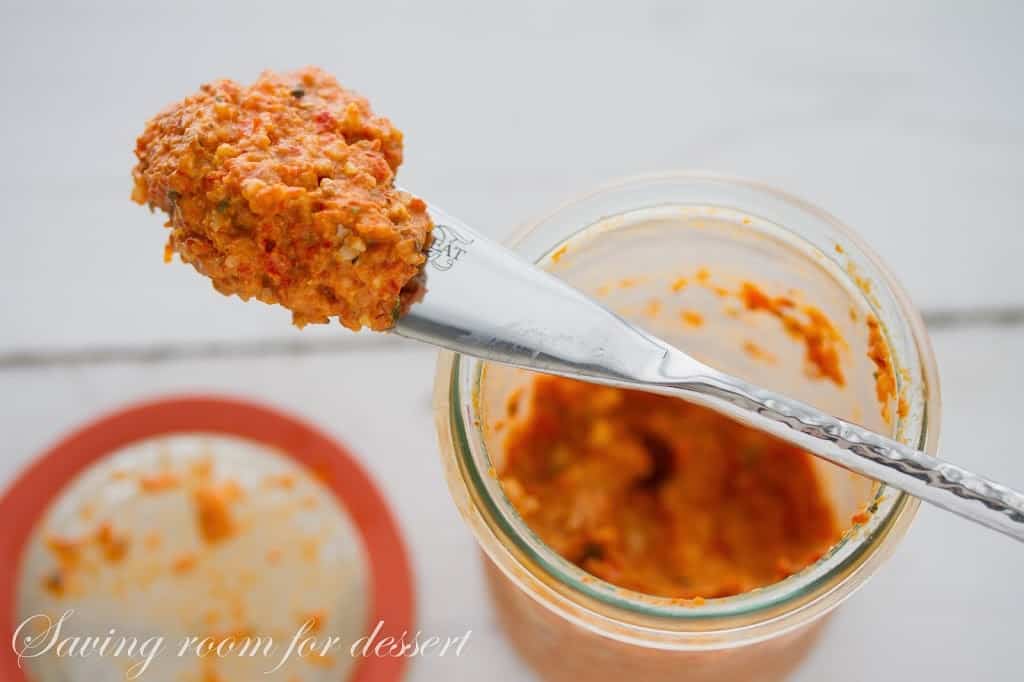 This would make a terrific pasta sauce, healthy spread on a vegetable sandwich, or a condiment on grilled steak or even burgers.  I even had some on grilled squash.  Roasting brings out the sweetness of the red peppers and the chipotle turns up the smoky-spicy flavor. 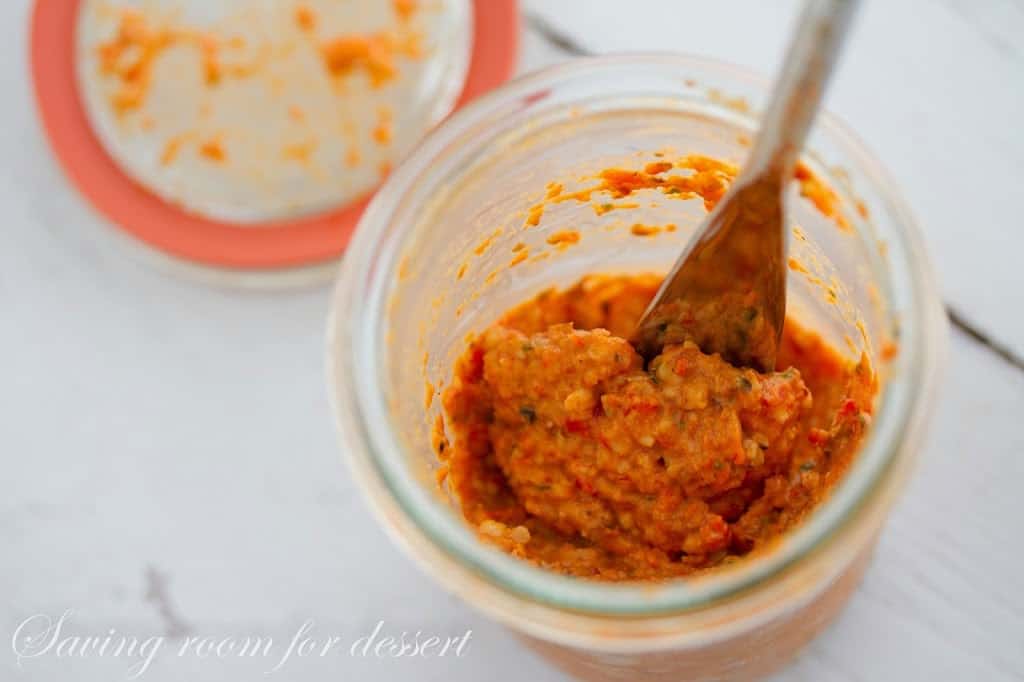 Make a double batch of this healthy spread – you’ll be glad you did.
Smoky Red Pepper Pesto on Grilled Chicken Panini
For the pesto:
2 large or 12 small red bell peppers, stems and seeds removed
1 jarred chipotle pepper in adobo sauce
1 small garlic clove, minced
2 tablespoons raw almonds, toasted
1 teaspoon fresh oregano
salt and pepper
2 tablespoons extra-virgin olive oil
For the panini:
2 grilled boneless, skinless chicken breasts, sliced
sharp cheddar cheese to taste
raw spinach leaves
4 small ciabatta rolls
Olive oil for grilling or pressing the panini
Place the peppers cut side down on a foil lined baking sheet.  Broil on high about 8-10 inches from the heating element until the peppers are blistered and charred.  Be sure to leave the oven door cracked while broiling and watch the peppers carefully.  Once they start to char it doesn’t take long.  Remove the peppers to a paper bag and seal for about 10 minutes or until the skin is peeling away from the peppers.  Remove most of the charred skin and add the peppers to a food processor.  Add the toasted almonds, chipotle pepper, and a little of the adobo sauce, the garlic, oregano and a dash of salt and pepper.  Process until smooth.  Drizzle on two tablespoon olive oil and process again until blended.  Add more olive oil, 1 teaspoon at a time, if needed for desired consistency.  Taste the pesto and add more salt and pepper if desired.
Spread each roll with a generous portion of pesto.  Layer with cheese, sliced chicken breasts, and spinach.  Lightly brush the top and bottom of the panini with olive oil and grill until lightly browned and the cheese slightly melted.
Serve immediately.  Makes 4 sandwiches
(Adapted from a recipe in Whole Living Magazine – March 2012)
~~~~~~~~~~~~~~~~~~~~~~~~~~~~~~~~~~~~~~~~~~~~~

This is a great summer sandwich and the pesto can be adapted for many uses.  And it’s so pretty too!  How’s the weather where you are?  We’re hot – big surprise!   Hope you have a wonderful weekend – and thanks so much for stopping by!