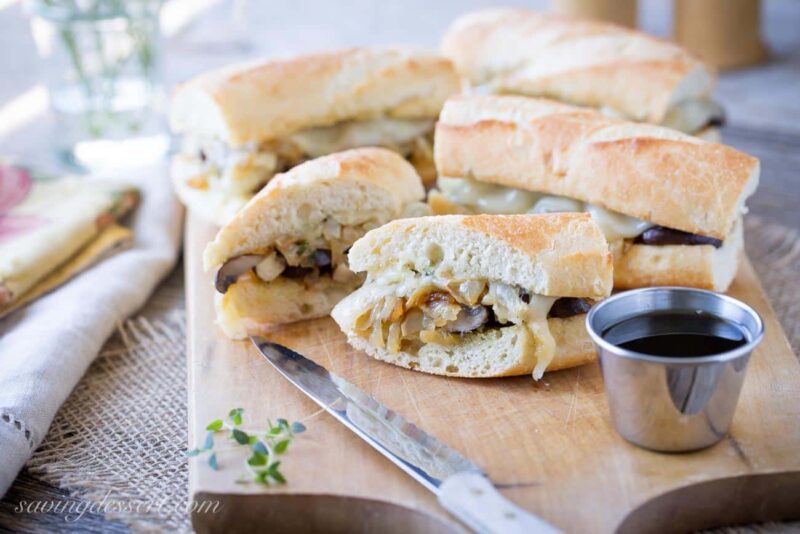 If you cook for more than yourself, I’m sure you’ve had suggestions or requests for special dishes from time to time.  My husband recently asked me to make French Onion Soup sometime.  I started thinking about a recipe and immediately got stuck at “beef broth.”  Not my favorite broth flavor for sure but I adore caramelized onions, french bread and cheese – so how could I make the soup without beef broth?  I started thinking about an open face sandwich layered with onions and cheese, then moved on to a panini and finally got stuck on a the idea of a French Dip with Mushroom Jus.  We have almost all the ingredients that come in a good French Onion Soup – cheese, bread and onions with a special bonus of mushrooms and mushroom jus (for dipping.)

I don’t think this completely cured his French Onion Soup craving, but boy it sure came close!  The mushroom jus (a/k/a mushroom stock or broth) is wonderful for dipping and it’s also vegetarian so if you’re looking for an occasional meatless meal, this one is “that something special and different” and did I mention … it’s also absolutely delicious! 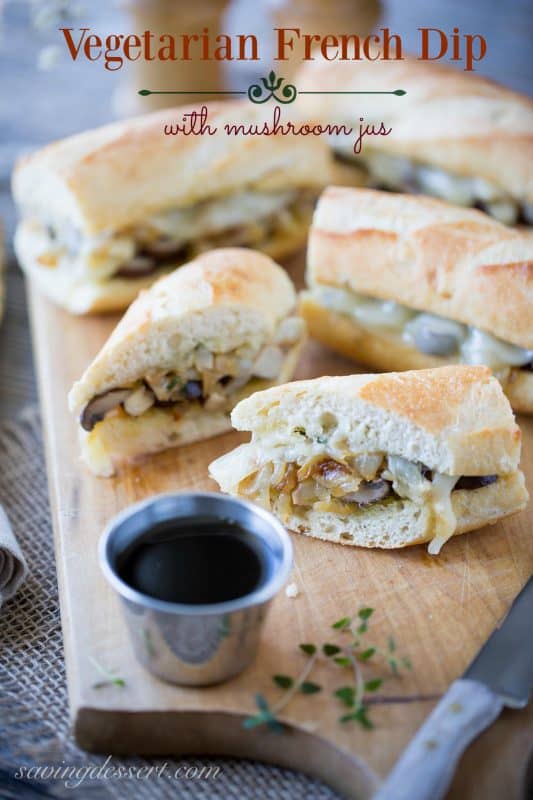 Portobello Mushrooms are baked until tender, sliced and heaped on top of garlic toasted french baguettes.  The mushrooms are then topped with caramelized onions and provolone cheese.  The sandwich is placed under the broiler for just a minute or two or until the cheese is melted and gooey. 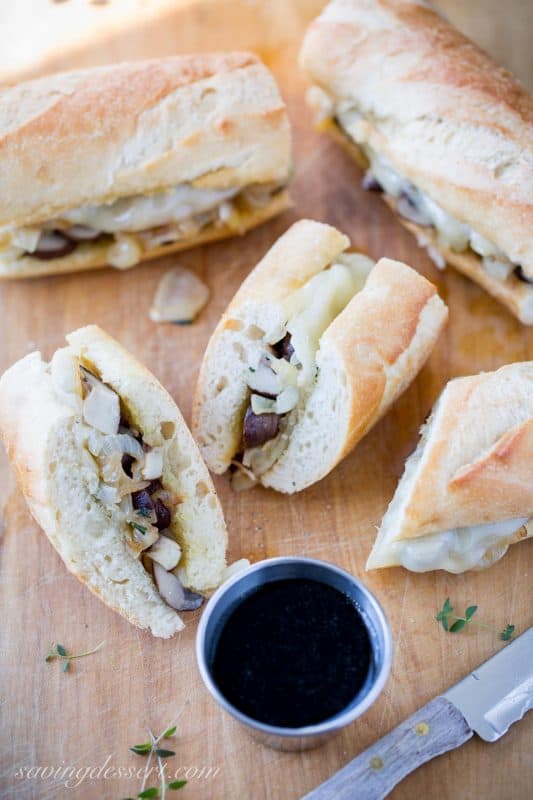 The mushroom jus is made by simmering garlic and mushrooms until reduced into a nice thick broth.  Soy Sauce, Liquid Aminos or Tamari is then stirred into the strained broth and served with the sandwiches.  The mushrooms are juicy, the onions are sweet and soft, and the cheese is dreamy creamy.  What a treat! 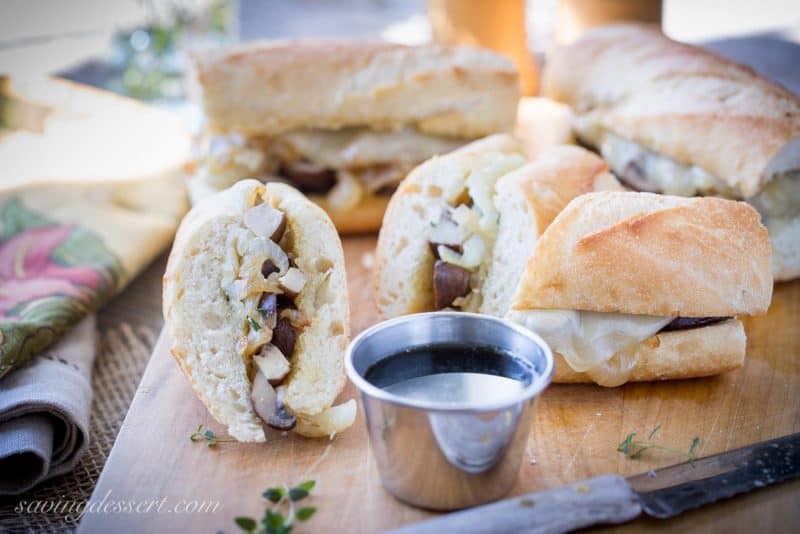 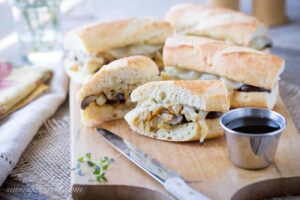 For the mushroom jus:

I hope you had a lovely weekend.  It was beautiful, but cool, here in Virginia.  We’ve been so crazy busy lately that I was thrilled to finally get back in the kitchen.  I hosted a baby shower last weekend for our son and daughter-in-law.  They’re expecting their first baby (a girl!) in early April.  They have so many friends so I was not a bit surprised when 80 people showed up for the co-ed shower.  What a great group of people.  We rented a building close to home and served lots of food and played games.  I have to say that was my first co-ed baby shower and it was a good one!  I’ve never seen so many gifts.  They are truly blessed.  As the shower was winding down I was not looking forward to the clean up as it had been a long day.  All of a sudden everybody started bagging the trash, breaking down the tables, putting the folding chairs away and loading everything in the cars!  They even grabbed the brooms and swept the entire room before I could pack up my stuff and the food.  Done in 30 minutes – how cool is that?!? 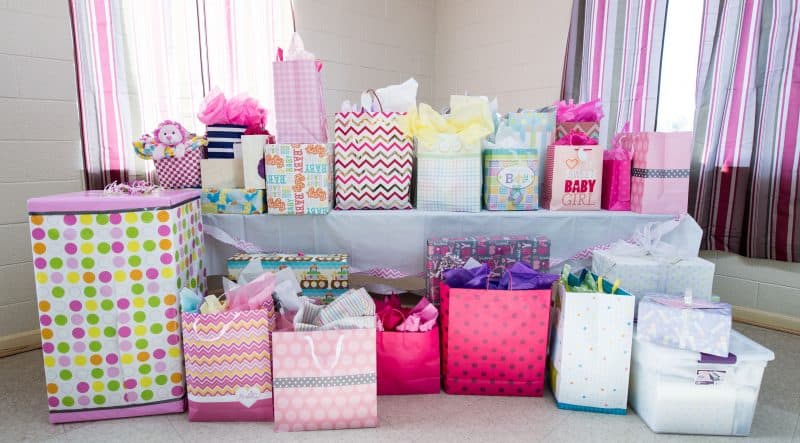 Look at all these presents!  My granddaughter is a lucky girl 🙂 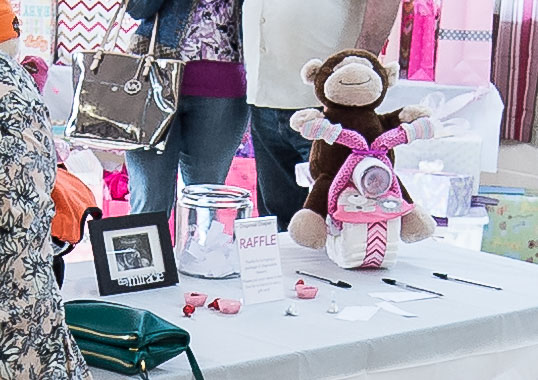 Our daughter Allie made a diaper cake in the shape of a motorcycle for a gift – so cute!

Thanks so much for stopping by – hope you have a wonderful week.