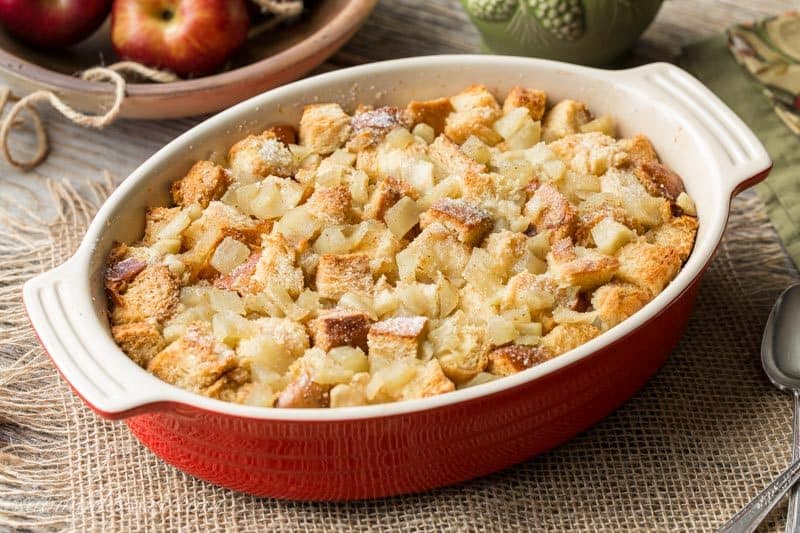 This deliciously comforting Apple Bread Pudding has a custardy middle, layers of soft brandy spiked apples and a crispy top. And, you won’t want to miss adding a drizzle of Apple Brandy Sauce – total apple heaven!

Why does it seem the best recipes are often the most homely? When I look at a well made bread pudding, I often think it looks like a bowl of croutons. How could this bowl of bread have loads of flavor and be a completely satisfying, delicious dessert? I don’t know but it works! 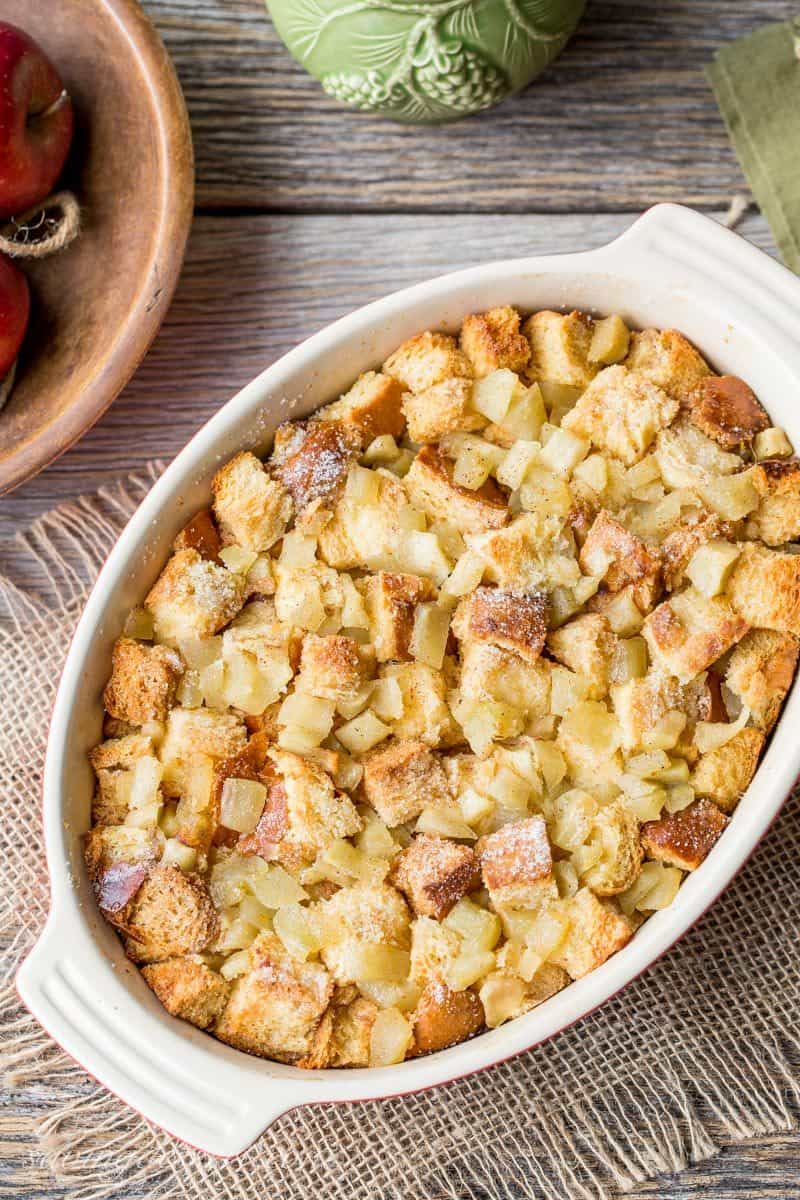 Bread pudding, both sweet and savory, has a long history as the best way to use up stale bread.

Nobody likes to waste food especially when you can make something that tastes this fantastic!

Different types of bread yield different results but the method is often the same. Toast or dry out cubes of bread, then soak them in an egg mixture before baking.

Our bread pudding is made with challah, a traditional Jewish bread with a slightly sweet eggy flavor. A nice loaf of brioche would work well here too.  Many bread pudding recipes include raisins or other dried fruits.

But to change things up I layered this bread pudding with diced apples simmered with a little apple brandy. 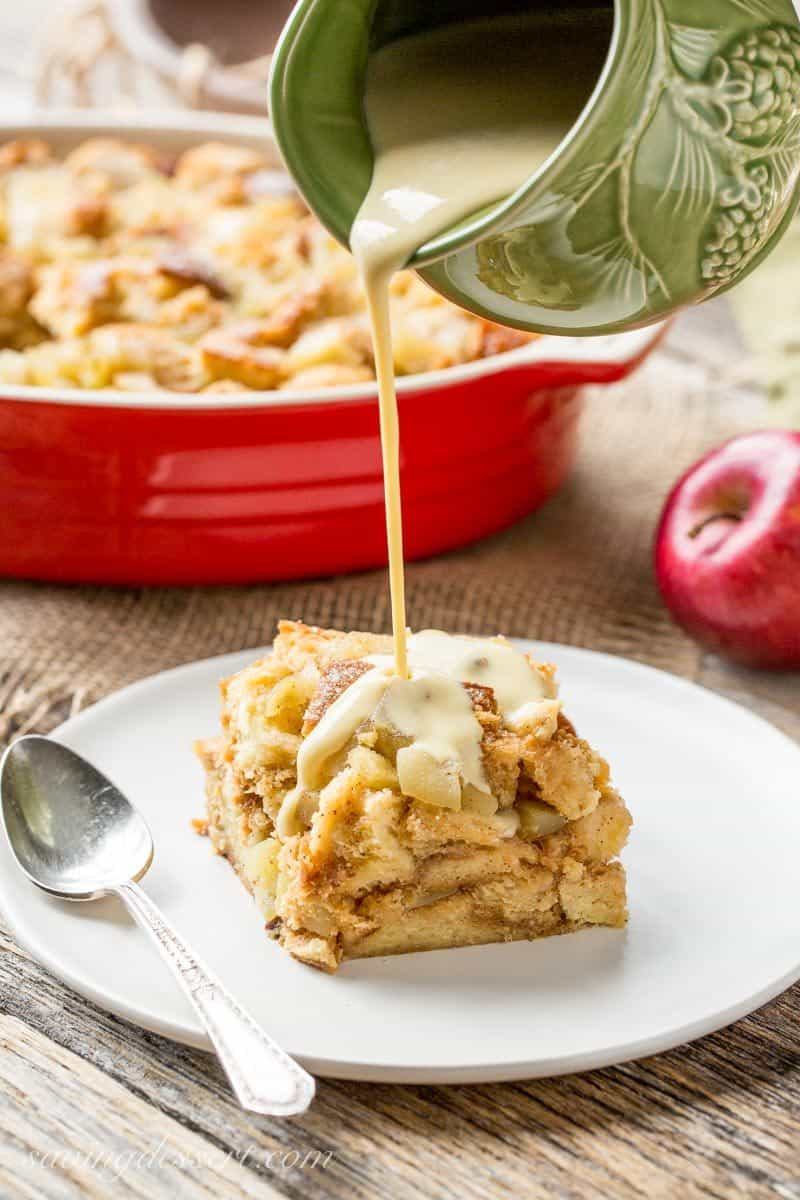 Have you ever seen bread pudding that look wet and runny and hardly recognizable?

Not this bread pudding! The layers are soft, the top is slightly crunchy and the flavor is out of this world delicious. If you’ve ever wondered if you’d like bread pudding, let this be your first recipe to try. 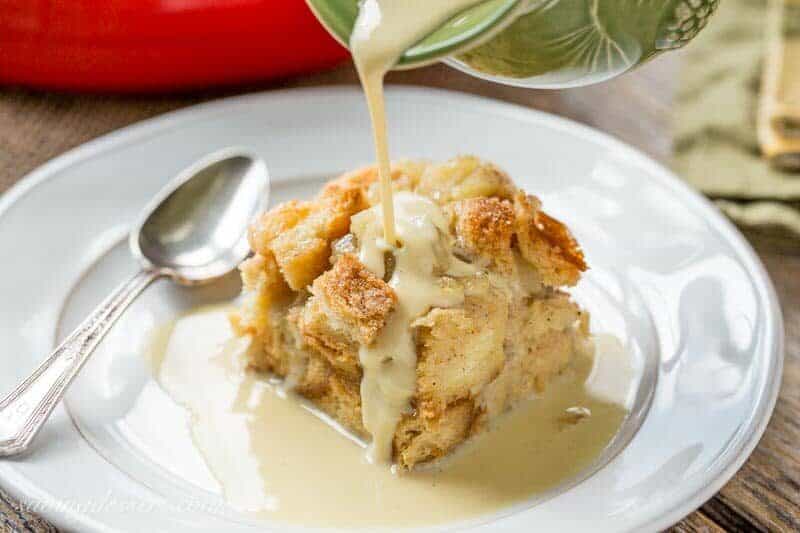 Okay maybe a little extra Apple Brandy Sauce for me.

Our Apple Brandy sauce is not very thick, but it’s absolutely perfect poured over this pudding. The sauce soaks into the bread, and well, you’re going to love it. 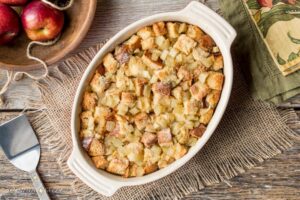 For the Bread Pudding:

For the Brandy Sauce:

For the Bread Pudding:

For the Brandy Sauce:

We love baking and cooking with seasonal fruits, and apples are so versatile and delicious.

We have some terrific apple recipes in the SRFD archives like this tasty Irish Apple Crumble Cake also served with a creamy Apple Brandy Sauce.

We love these Apple Cinnamon Rolls with Apple Cider Glaze for a super special breakfast or brunch.  Another wonderful dessert is this simple Apple, Cranberry & Currant Crumb Pie – perfect for the holiday season.

Finally, try this Old Fashioned Apple Crisp for an easy and quick dessert the whole family will love.