This fantastic combination of flavors and textures makes homemade Apple Crisp one of the most beloved fall desserts. If you can peel an apple, you can make this incredible, timeless treat!

Like many other recipes for fruit crisps, ours is easy to make. However, we’ve taken the basic combination a step further by adding 1/2 cup apple cider to the fresh apple mixture.

By cooking the apples in cider, we’ve created an intensely flavored juicy base for the sweet streusel topping. This is a memorable dessert you’ll want to make again and again!

Where does Apple Crisp come from?

The original crisp recipe was invented in Britain and first published in a cookbook in 1924. According to Wikipedia, this dessert became even more popular during World War II when food rationing made it difficult to find ingredients for the more elaborate apple pie.

The British call this an apple crumble but across the pond we call it a crisp. We just have to be different!

For the Apple Crisp topping:

For the apple mixture:

Overview: How to make Apple Crisp

Next, prepare the apple mixture:

To serve a fresh fruit crisp:

Cool slightly before serving. Spoon into bowls and top with a scoop of vanilla ice cream, whipped cream, caramel sauce or a splash of heavy cream.

The best size pan for baking a crisp

For this dessert you can use an oven-proof skillet, a square baking pan or any casserole dish that will hold the apple mixture.

To cover all the apples use a 9×9-inch baking pan as we do with our Peach Crisp. If using a 13×9-inch pan as shown above, you’ll have some some apples peaking through.

Again, this is such an easy and forgiving recipe, it’s hard to mess up! If your apple mixture fills up the pan, bake on a foil lined baking cookie sheet to catch any juices that might bubble over.

I often say that the best baking apples are the ones that you already have on hand. However, if you’re going to the store anyway, here’s a few of our favorites:

Many bakers also love to bake with honeycrisp and Winesap varieties.

Feel free to use a combination of delicious apples or just one variety; it’s all good! We typically use at least a few Granny Smith apples as they keep their shape when baked but soften into tender, tart pillows of deliciousness.

How to store leftover Apple Crisp

If you have leftovers cover with plastic wrap and leave at room temperature for up to two days. For longer storage seal in an airtight container and refrigerate.

To rewarm individual servings microwave at 50% power for 30 second intervals to take the chill off.

This apple dessert is completely delicious served warm, room temperature or even cold straight out of the refrigerator. We’ve tested this many, many times. Pinky shake promise!

Can you freeze Apple Crisp?

As with any fresh fruit dessert, it’s best eaten the day it’s made. If you want to sneak a bowl or two into the freezer, make sure it’s well sealed in an airtight container.

It will keep for about two months and should be refrigerated once removed from the freezer to thaw.

The crisp won’t be as crispy as when it was first baked, but the flavors are still terrific. It still has a good chewiness from the oats, cranberries and nuts.

Rustic crisps and crumbles can be made with just about any kind of fruit or berries. While the topping ingredients may be basically same, the fresh fruit mixture can vary from recipe to recipe.

Try our Blueberry Crisp when berries are in season or use a combination of peaches and blueberries for a visually beautiful dessert. 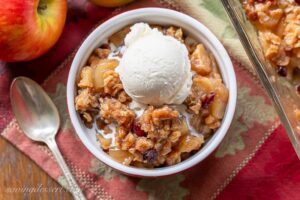 For the apple mixture:

To prepare the topping:

To prepare the apple mixture: