Tender, flaky, buttery and sweet, and loaded with cinnamon.

Pioneer Woman’s Cinnamon Rolls are some of the best sweet rolls I’ve ever had. I first made these cinnamon rolls in January, 2011. Ree’s original recipe was developed with the idea that you’ll share entire pans of these cinnamon rolls with friends, family, neighbors, coworkers, etc.

As developed, the original recipe makes 7 or 8 disposable foil pans filled with sweet cinnamon rolls, depending on how thick you cut each roll. Needless to say, there are plenty to share, and enjoy! 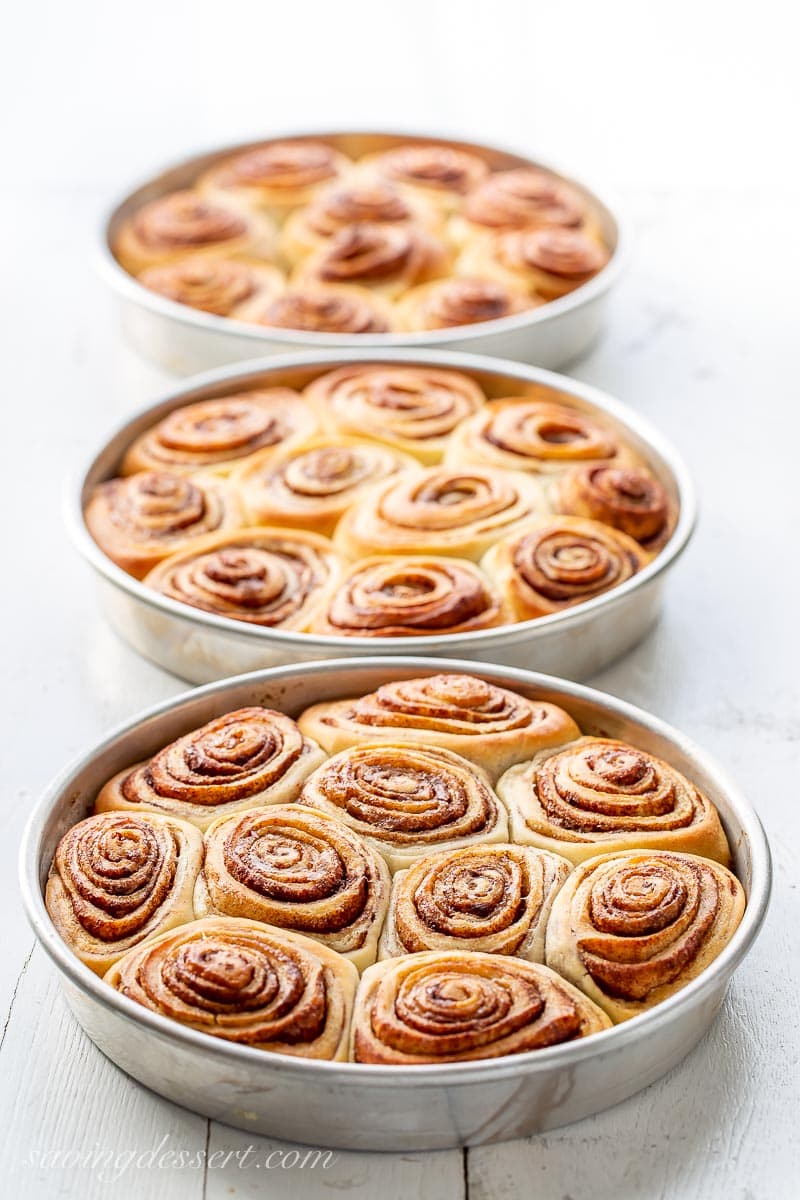 Pioneer Woman’s Cinnamon Rolls are one of the easiest yeast roll recipes I’ve ever made.

Have you ever tried making cinnamon rolls only to have them not rise properly, over-proof due to vague instructions or turn out to be a total disaster, waste of time and money? If you said yes to any part of that question, I encourage you to try this recipe.

The recipe seems completely foolproof and very forgiving, and each and every roll comes out of the oven filled with deliciousness.

I’ve made a few changes to the original recipe.

For this updated post I’ve tweaked Ree’s original recipe by cutting it in half, fine tuned the ingredient measurements, and provided more detailed instructions. This recipe is a keeper; you’ll want to share the recipe, as well as the rolls, with all your baking buddies. 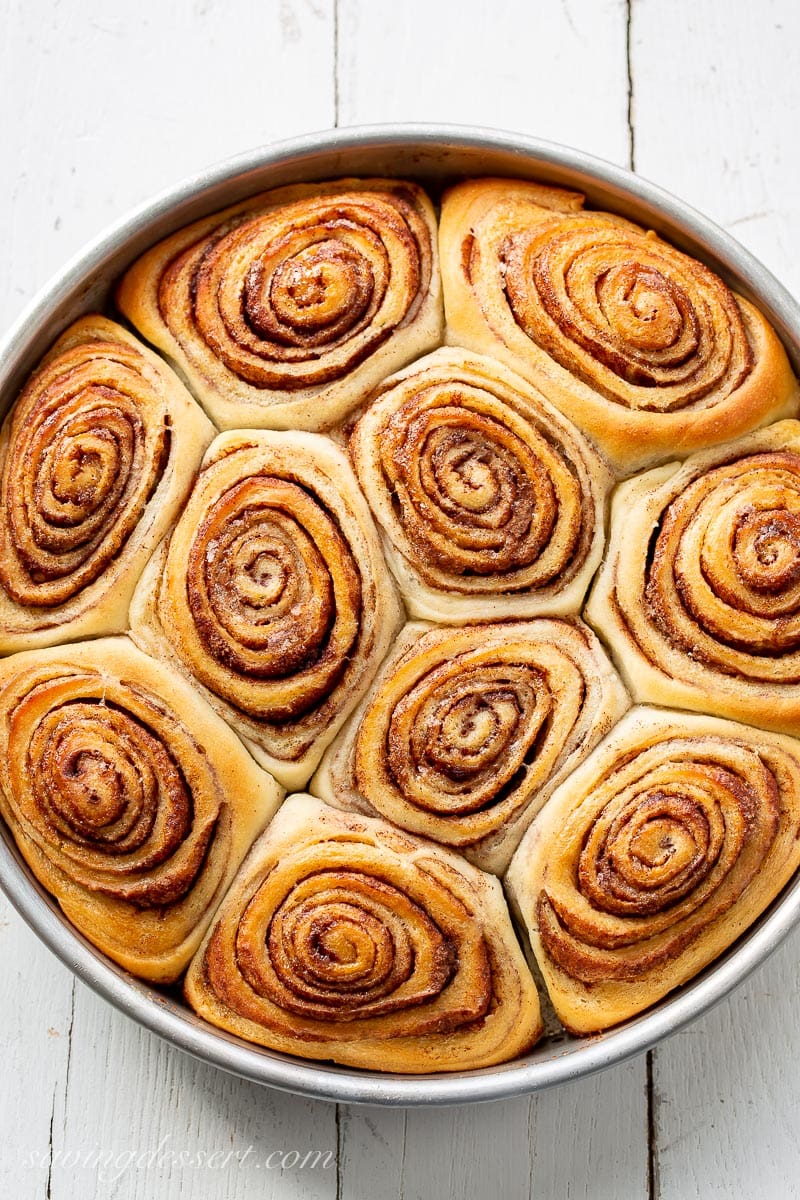 Ree’s cinnamon rolls are some of the best things I’ve ever eaten. They’re easy, gooey, a little bit messy and oh so wonderful. The dough is rolled out very thin, allowing for great amounts of filling made with melted butter, sugar and cinnamon. The ratio of filling to roll is utter perfection and the spirals are so pretty! 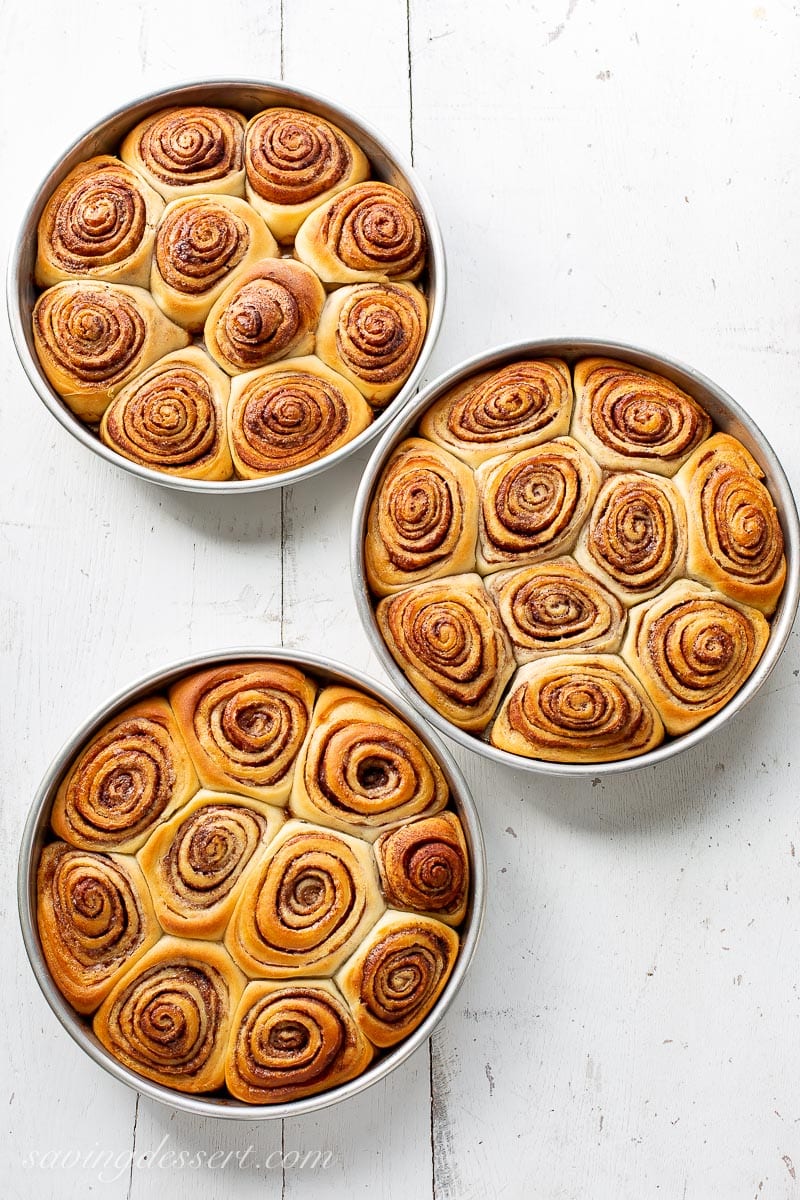 A note of warning about these cinnamon rolls. Be absolutely sure you have several special someones to share these with. If you keep all these rolls for yourself, I guarantee you’ll want to devour them all.  They are addictive.
You can bake your rolls in four disposal 7-inch foil pans, which are perfect for gifting.  Or, make these rolls in four 8-inch cake pans or three 9-inch cake pans as I’ve done here. 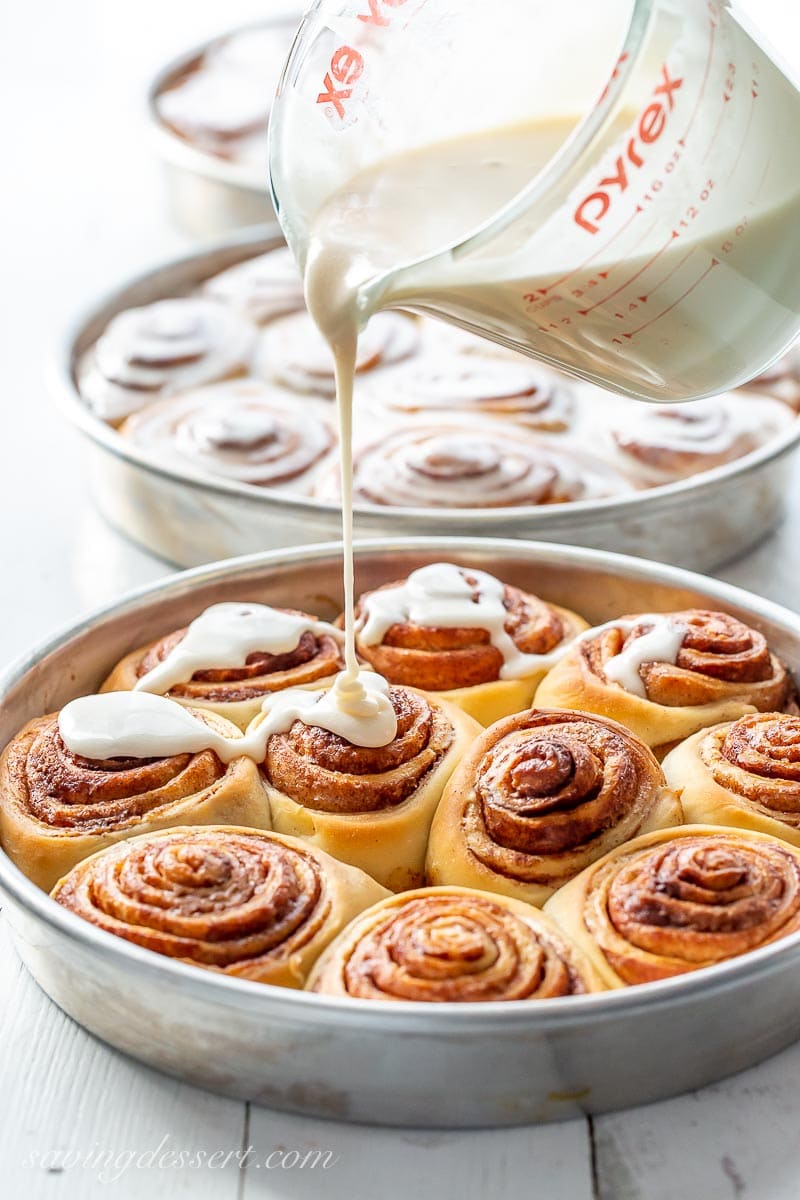 Another reason Pioneer Woman’s Cinnamon Rolls are so good is the unique maple frosting recipe.

In addition to the fantastic cinnamon filling, another stand-out feature of this recipe is the maple frosting. Made with powdered sugar, maple extract, milk, butter and a little brewed coffee, this frosting is generously drizzled over warm rolls.

Just one tablespoon of strong brewed coffee gives the frosting a unique flavor that blends perfectly with the cinnamon. I never would’ve thought to combine coffee and maple extract, but it really works. 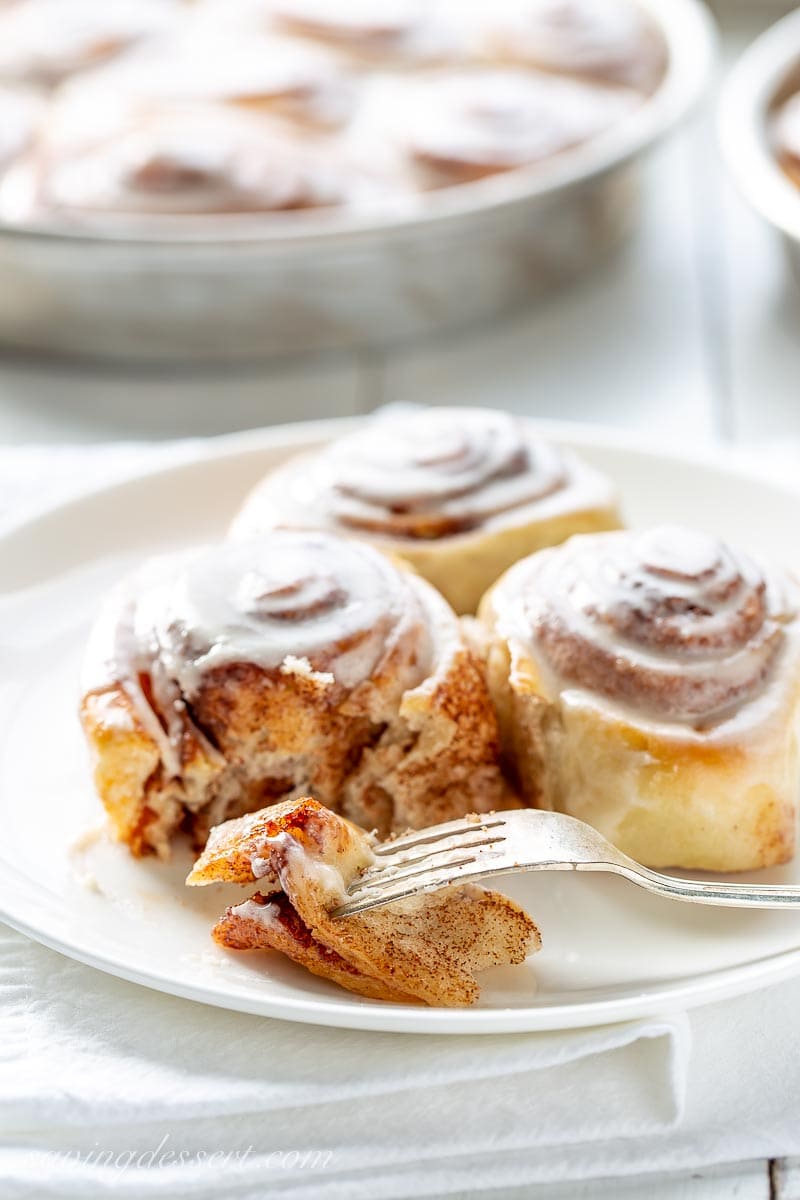 The addition of baking powder and baking soda is unique in a yeasted dough.

To achieve a soft sweet-bread texture and yeasty flavor you’ll find in a true cinnamon roll, this recipes uses yeast, baking powder and baking soda. It’s very unusual for a recipe to call for three leavening agents, but it really works for these rolls!  This bold combination of leaveners means the rolls only need 30 minutes of rise time after shaping into spirals.

Also, a lower oven temperature ensures they have enough time to rise high before the tops set. The end result is soft, puffy, flaky rolls that are not at all chewy. They practically melt in your mouth! 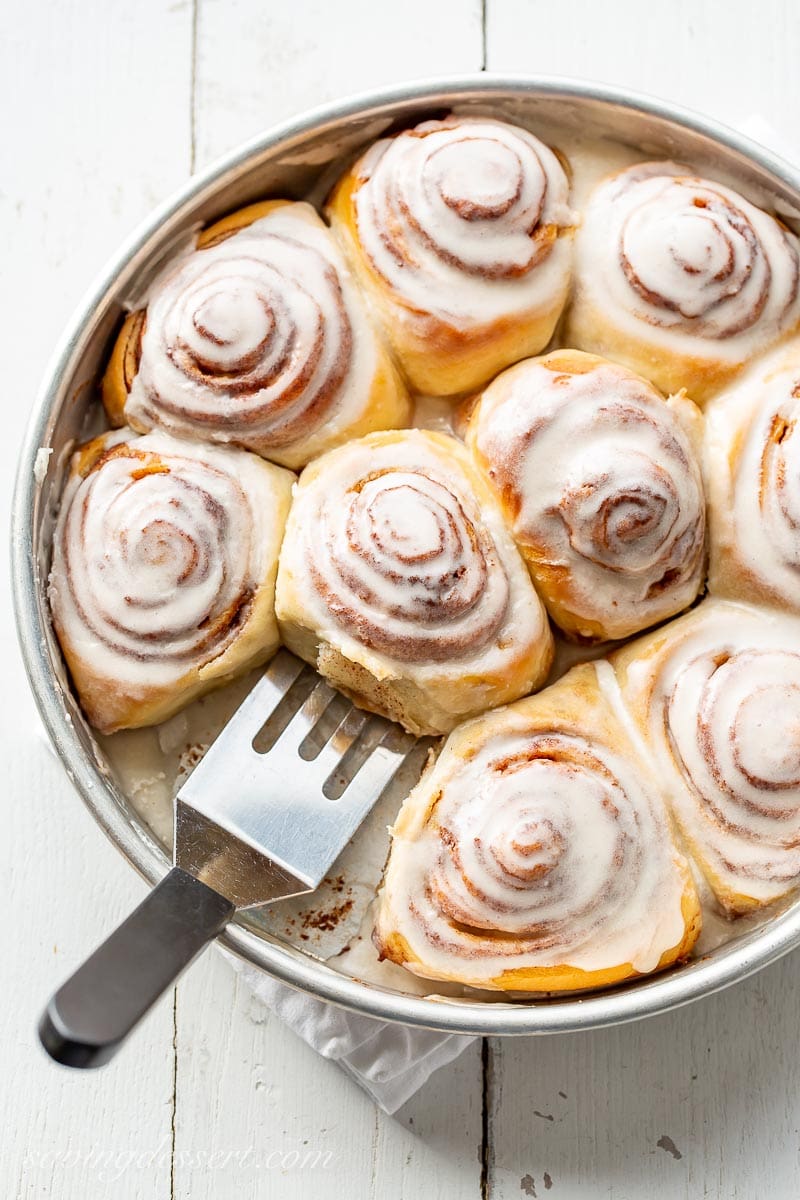 I have not tried freezing these rolls before baking. However, I have frozen multiple pans of these rolls after they were baked but before they were frosted, with great results.

Can these cinnamon rolls be made ahead?

This cinnamon roll dough can be made up to 3 days ahead. Keep the dough well covered in the refrigerator and check it at least once a day. Punch the dough down if needed to keep the size under control. With a very short rise time of 30-minutes for the finished rolls, this a great recipe to make ahead and bake when needed.

Can you double this recipe for cinnamon rolls?

Yes, this recipe can easily be doubled so you have plenty of rolls to share. If you double the recipe, place the dough in a large pot or Dutch oven to rise in the refrigerator overnight. The sweet dough grows a good bit, and needs room to expand. 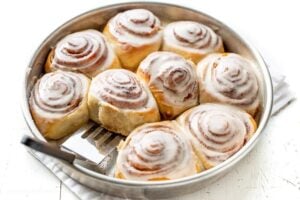 For the cinnamon rolls:

For the maple frosting:

To make the dough:

To make the cinnamon rolls:

To make the frosting:

Recipe adapted from Pioneer Woman. Nutrition information is calculated using an ingredient database and should be considered an estimate. When multiple ingredient alternatives are given, the first listed is calculated for nutrition. Garnishes and optional ingredients are not included.

Here are a few more swirly bread recipes you might also enjoy: 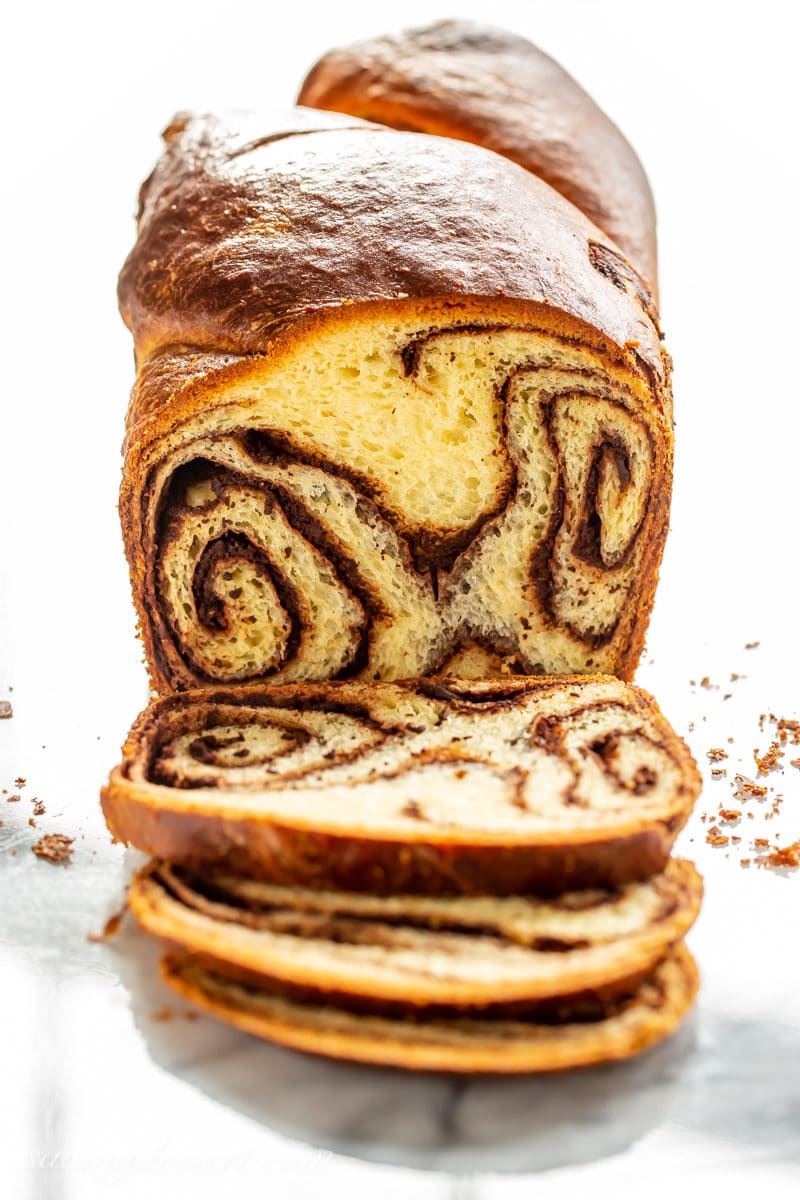 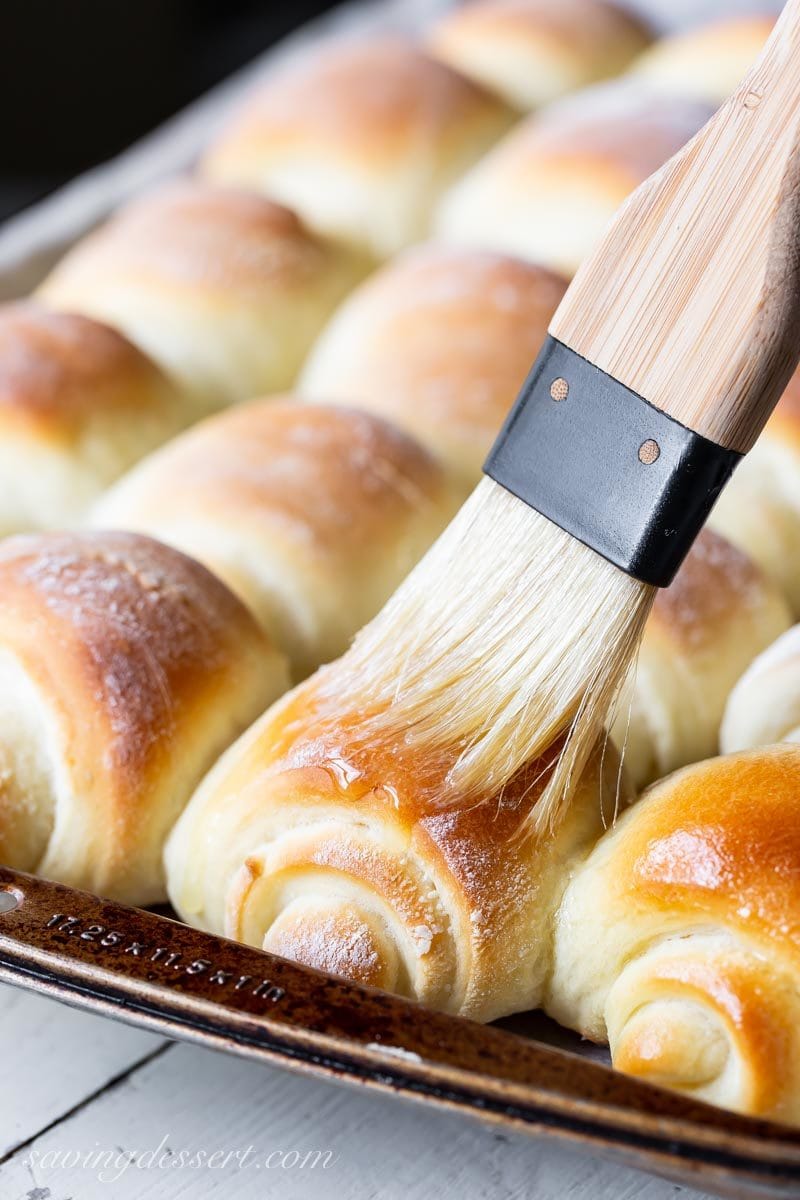 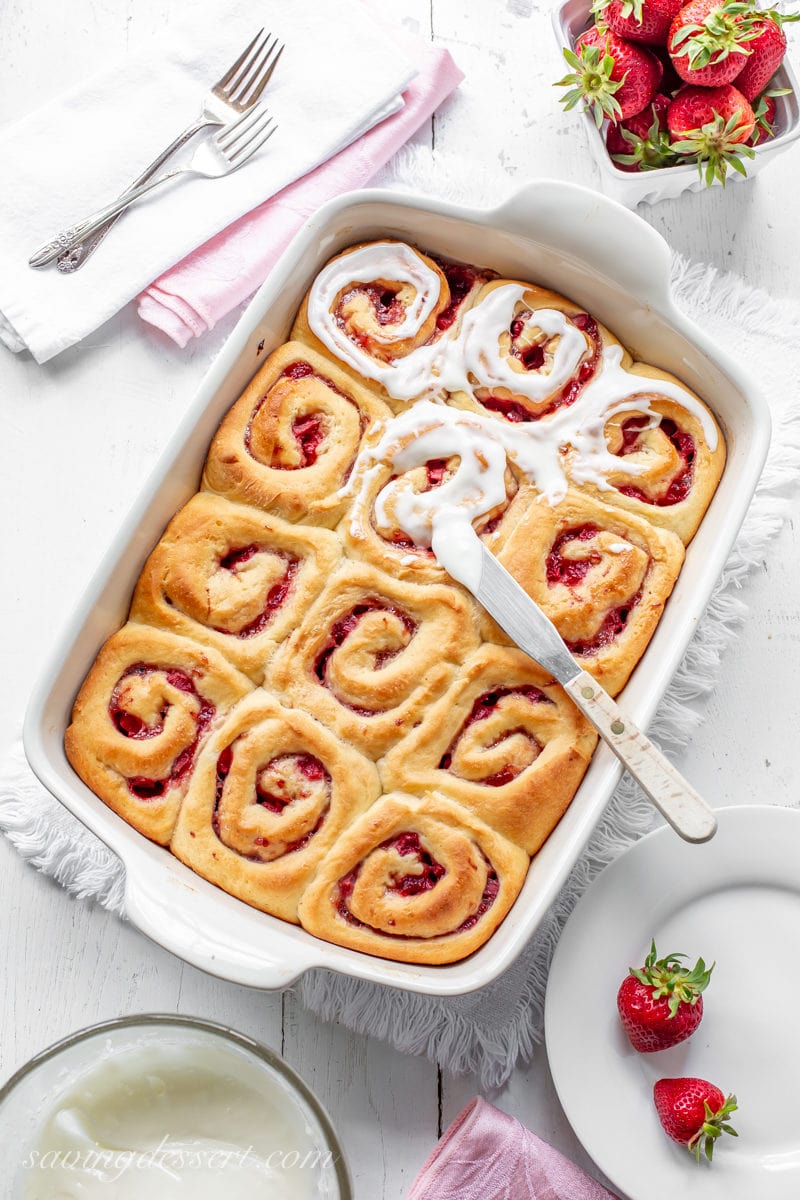