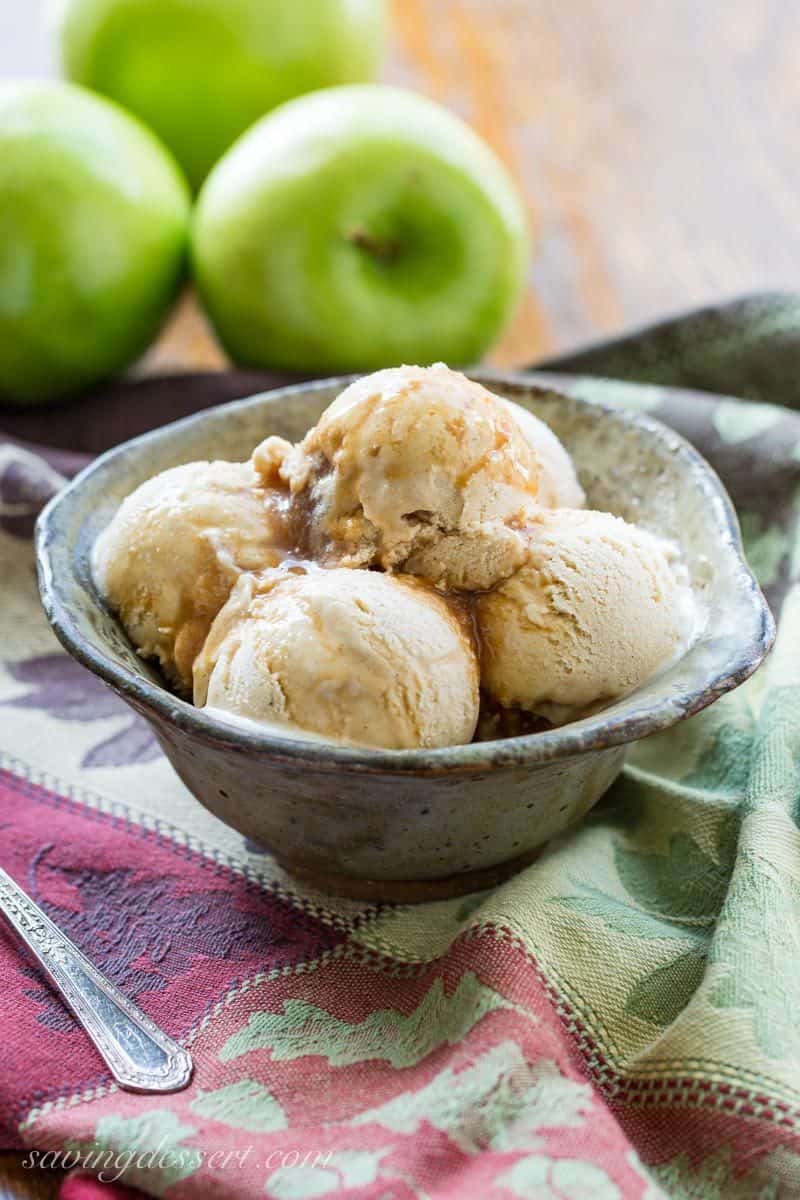 Pucker up peeps! If you love a tart apple, and sweet dreamy ice cream, you’ve come to the right place!

There are no hard and fast rules about eating ice cream during the fall and winter months, at least not in my house! In fact, apple cider ice cream is the perfect fall treat, especially one that tastes like warm cinnamon and baked apples with a zing from the boiled apple cider syrup.

Boiled apple cider should not be confused with apple cider vinegar. They have a completely different taste, one is sweet and the other taste like vinegar of course.

Quick view of the ingredients for Apple Cider Ice Cream:

First, boil the apple cider into a thick syrup. Cool until needed.

Next pour the milk into a saucepan and add 1/2 cup of sugar, salt and cinnamon. Warm over medium heat until the sugar dissolves and the mixture just starts to boil.

In a separate bowl whisk together the remaining sugar and the egg yolks. Temper the eggs by drizzling some of the hot mixture into the eggs and sugar. Pour the hot tempered egg mixture back into the saucepan and continue to heat until it reaches 175 degrees F on an instant-read thermometer.

Remove from the heat and add the boiled cider. Pour the mixture into a bowl set over an ice bath. Add the cream and stir to combine. Leave the ice cream base in the ice bath stirring occasionally until cooled. Refrigerate 8 hours or overnight.

Process the ice cream according to the manufacturer directions for your ice cream maker.

Scoop into a freezer safe container layering the ice cream with the remaining apple cider syrup. Freeze until firm then serve. 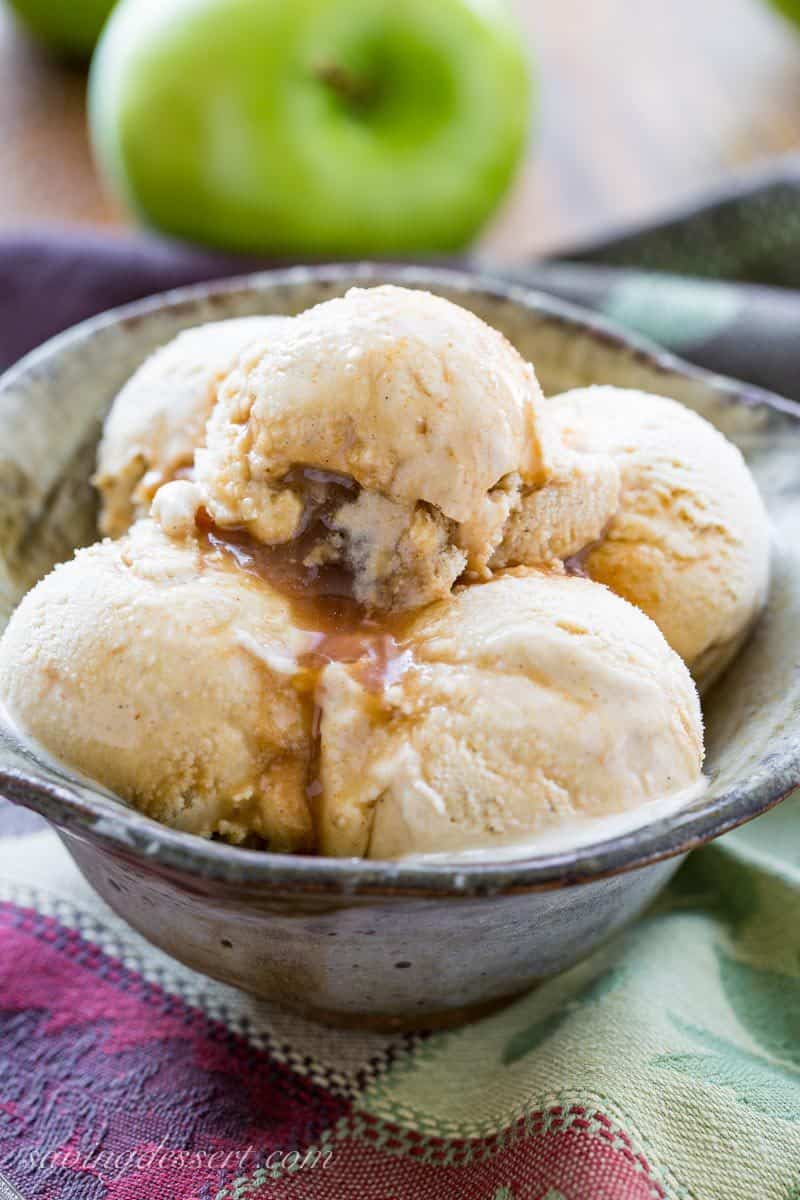 All natural apple cider is made by pressing the juice from fresh apples.

Nothing more is added to apple cider because the juice is already a perfect blend of naturally sweet and tart flavors.

Have you ever wondered about the differences between apple cider and apple juice?

Cider is raw apple juice that has not been cooked or filtered so it will appear cloudy because it still contains some pulp.

Apple juice is sometimes sweetened, typically filtered and pasteurized, and will keep much longer on the grocery store shelves. Both have their place in the kitchen and pantry, but today we are using fresh unpasteurized apple cider to make this delightful ice cream. 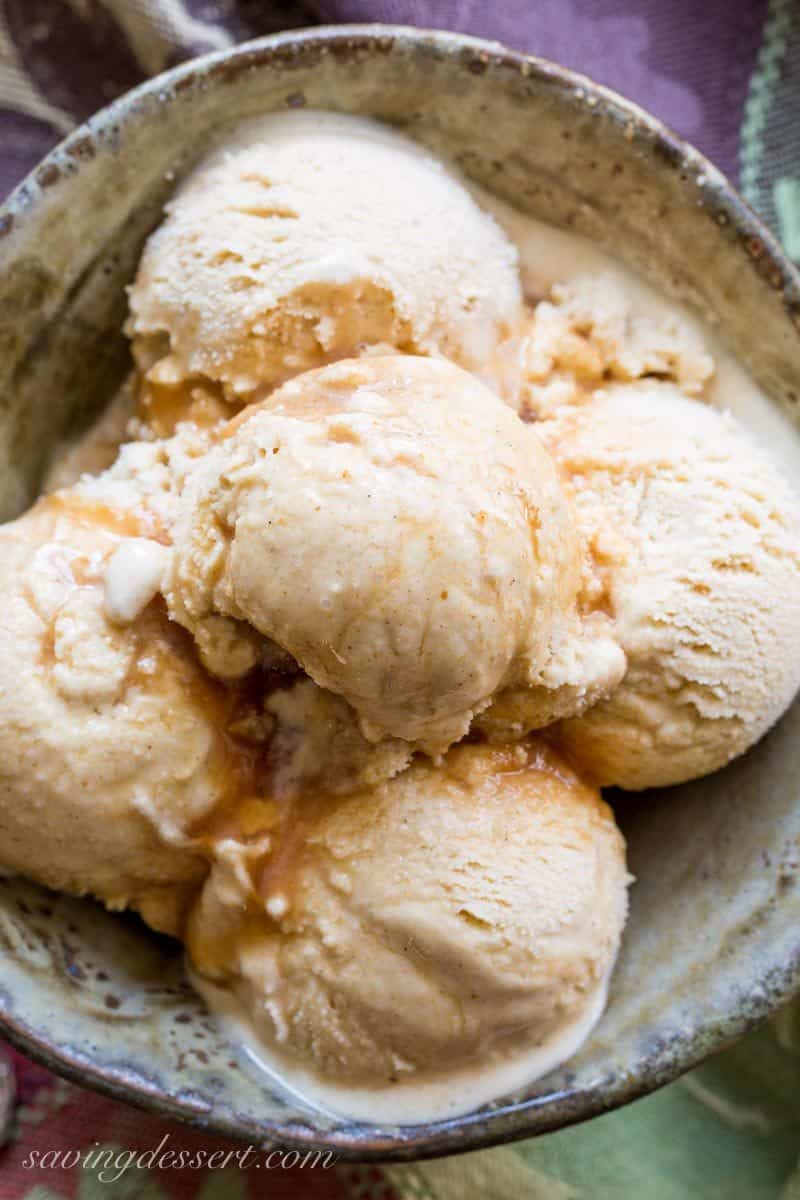 Fresh apple cider is boiled down into a syrup then added to the ice cream base.

Boiled apple cider is delicious, intense, sweet, thick like maple syrup, and crazy good on just about anything. Drizzle it on cornbread, waffles, pancakes, a bowl of ice cream, even a slice of apple pie or a spoon.

Or, make this ice cream and scoop it on top of my Classic Apple Pie for an incredible full on apple experience.

Because boiled apple cider is pretty sweet on it’s own, this ice cream is naturally on the sweeter side. I decided (at the insistence of my taste testing husband) that we would drizzle and swirl half the apple cider syrup into the finished ice cream, creating a caramel like layer.

The ribbon of apple cider syrup is deliciously intense. It’s similar to lemon curd which is sweet and tart at the same time with loads of lemon flavor. Apple cider syrup has the greatest apple flavor ever experienced.

However, if you think it’ll be too much tanginess for your apple loving crowd, I recommend adding half the syrup to the ice cream as directed. Then save the remaining syrup to pass when serving. Your guests can drizzle to their hearts delight! 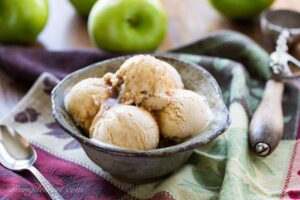 To make the boiled cider:

To make the ice cream:

Here are some more terrific ways to use apple cider during apple season:

Don’t miss this drool-worthy Apple Cider Doughnut Cake. This cake is easy to make and so delicious!

Hot Spiced Apple Cider Recipe is what the holidays taste like! Terrific served warm or cold and loaded with the warm flavors of cinnamon, cloves, allspice, and the fresh citrusy zing of lemon and orange.

Apple Cider Caramel Sauce is so luscious and delicious, you may find yourself buying extra apple cider as an excuse to make more!

Sweet and chewy, soft and buttery, Apple Cider Caramels are melt-in-your-mouth delicious. Make a batch and you may find yourself with a whole new group of friends.

And finally, be sure to try one of our all time favorite breakfast treats, baked Apple Cider Doughnuts.