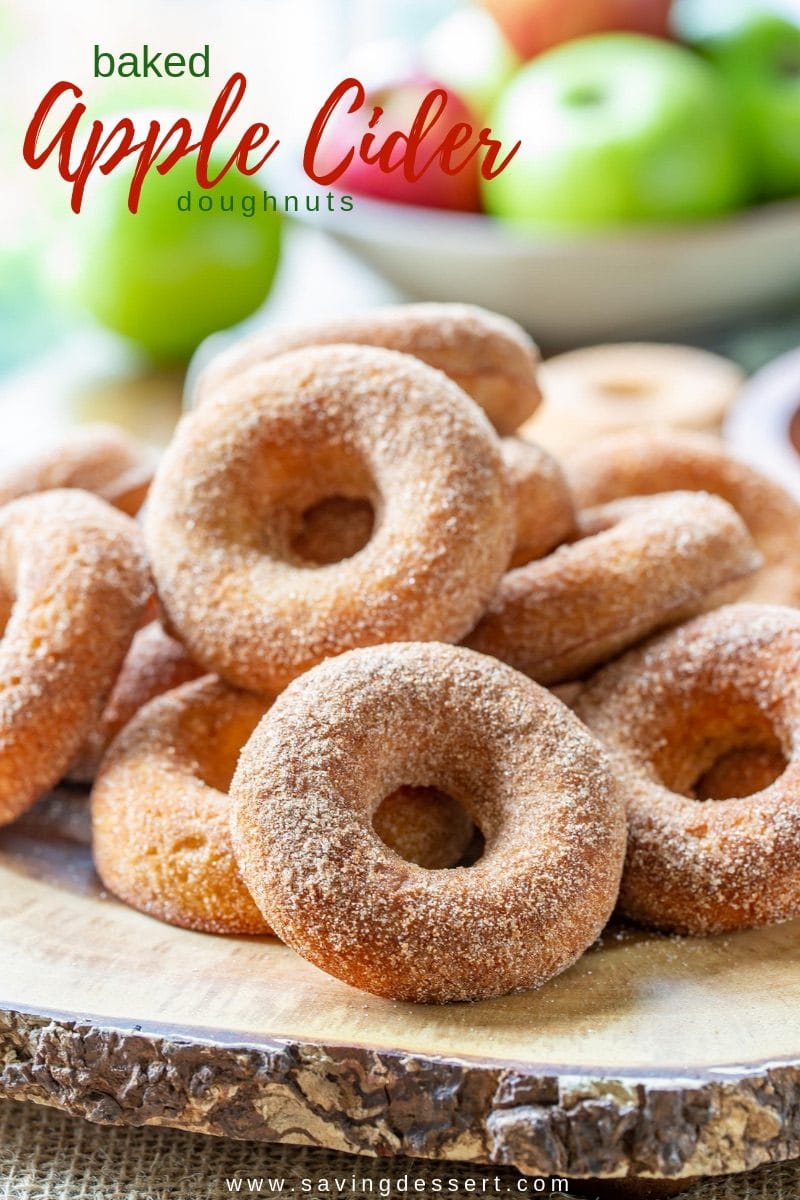 Apple cider is pretty amazing stuff. Whether adding to sweet or savory recipes, it’s a must have for fall cooking and baking. During apple season, most grocery stores carry fresh apple cider so be on the lookout for this magic elixir in the produce section. When you boil down the cider for this recipe, your house will smell amazing! Be sure to watch it closely as you don’t want it to boil over onto your stove. 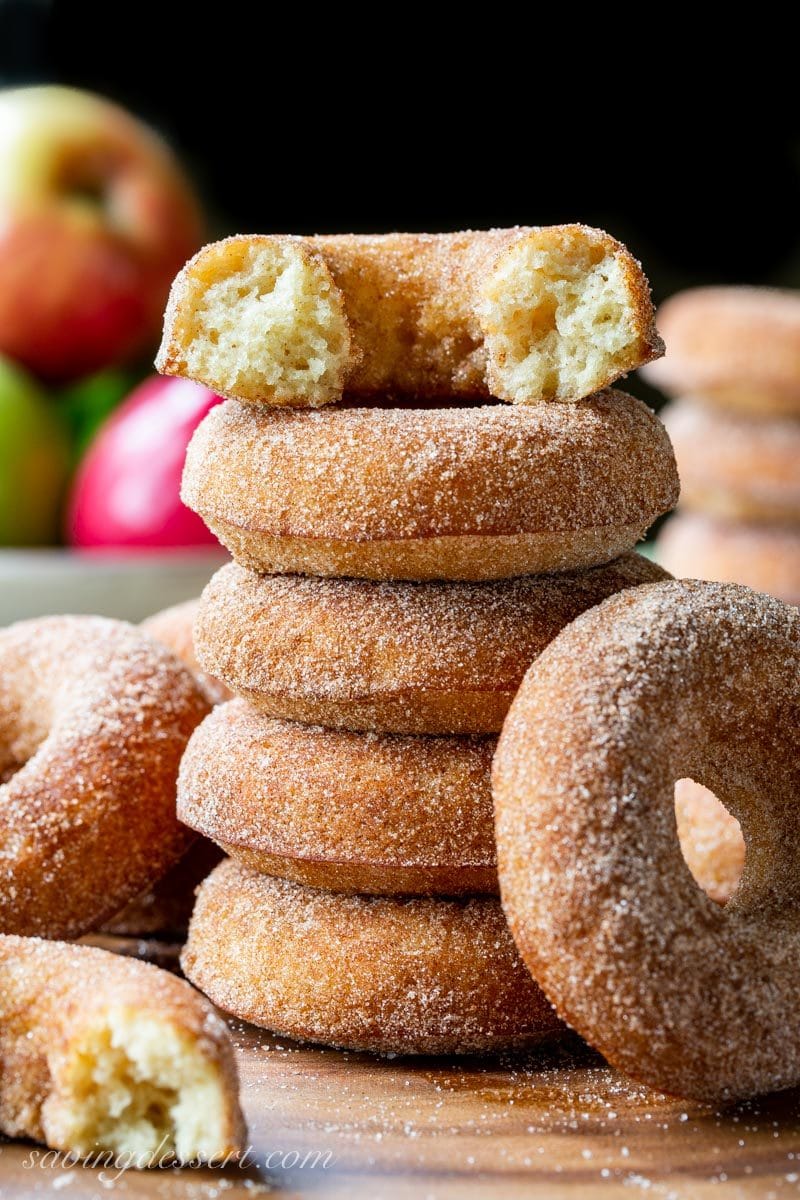 I’m not a fan of yeasty, fried doughnuts and am grateful there’s something in this world I don’t like to eat!

However, I do love a good baked doughnut and these Apple Cider Doughnuts are some of the best I’ve ever had. Each year we take a quick trip to Charlottesville Virginia, which is about an hour away, to pick apples at Carter Mountain Orchard. They have pre-picked or pick-your-own apples in several varieties. They also have a restaurant, a hard cider cellar, country store and bakery where they sell jams, cider, pies, ice cream, and the unbelievably popular fried apple cider doughnuts. My son and daughter-in-law never leave the mountain without a box of their doughnuts. Since I don’t care for fried doughnuts, I’ve never actually had one but I do like a bottle of hard cider, after I’ve picked apples of course. They host special events and are extremely busy during apple season. If you live in the area and want to visit, check their Facebook page before heading out to see if they’re closed due to overcrowding.

The popularity of their doughnuts prompted me to come up with my own recipe for a baked version of these treats.

I passed along a box of these homemade baked apple cider doughnuts to my son and daughter-in-law (center) and received a big thumbs up from his whole family. I bet they’ll still buy doughnuts from Carter Mountain, but that’s okay. Whenever we can’t make the trip to the mountain, we an always have my delicious homemade fresh Apple Cider Doughnuts! 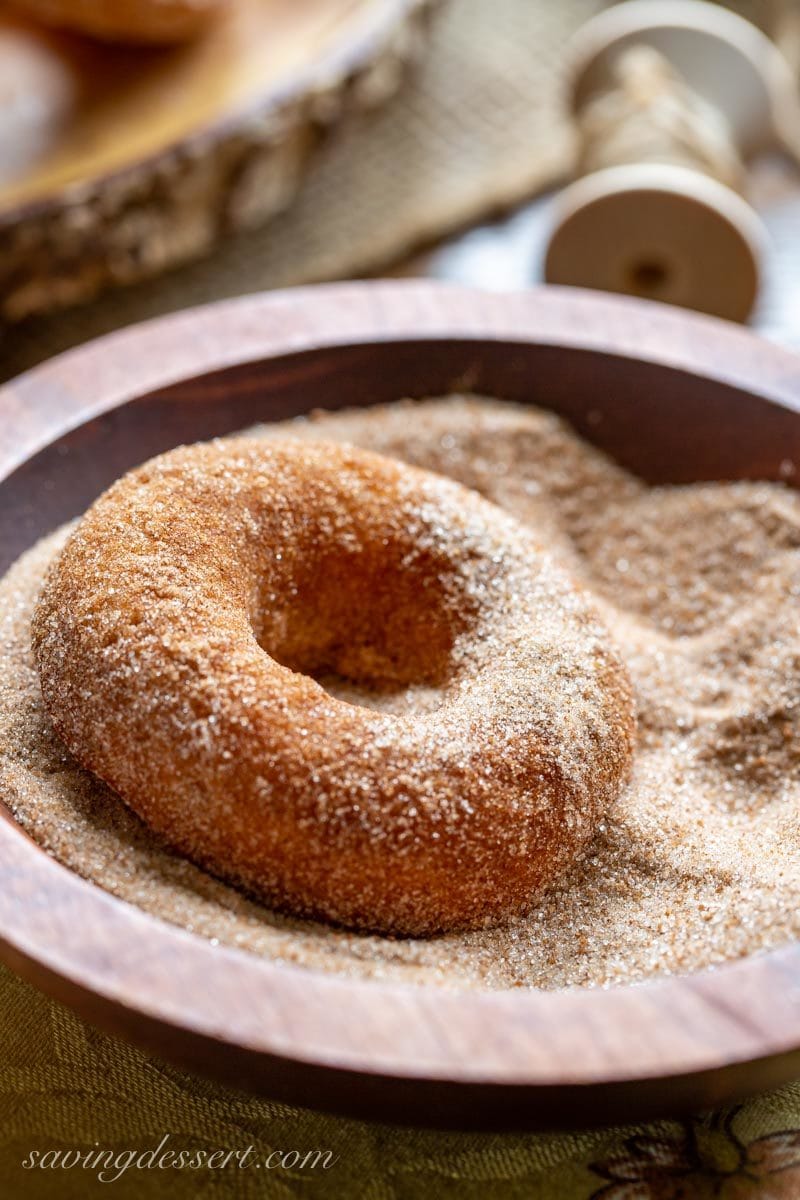 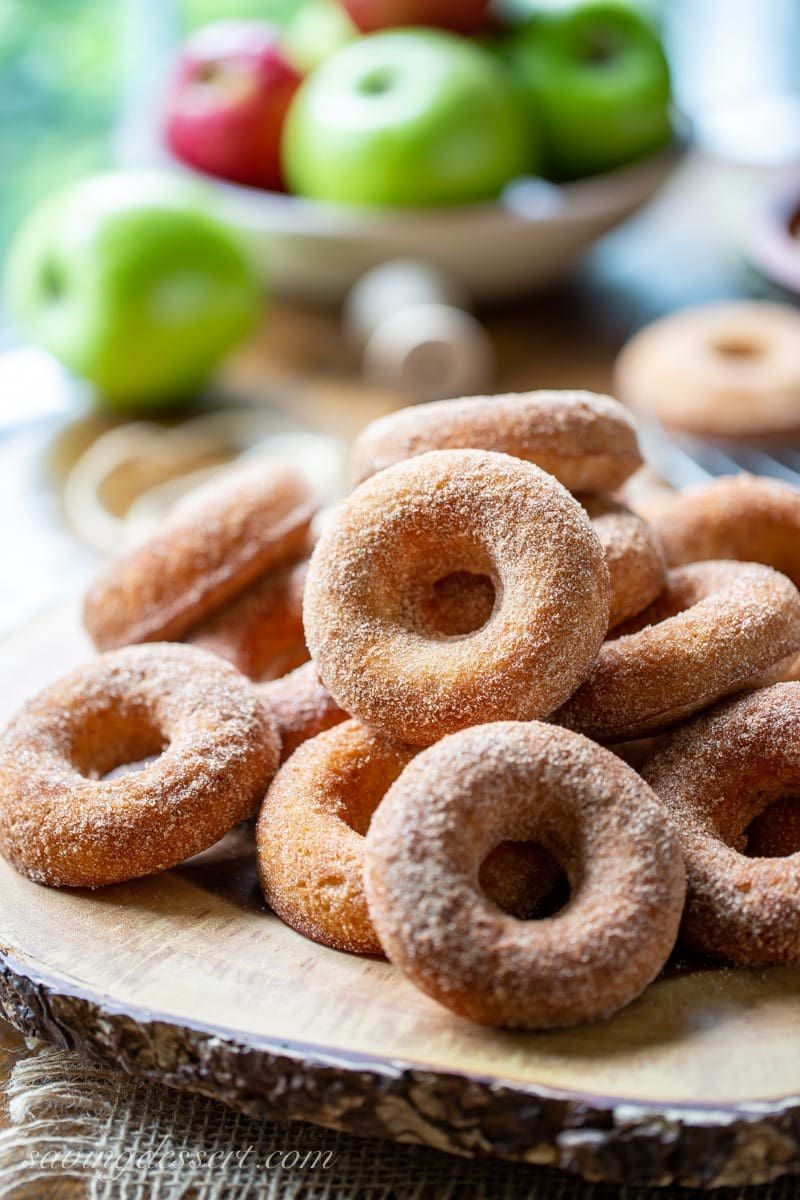 Apple cider is not the same as apple juice.

Good Apple cider is made by grinding and seriously pressing the apples to extract the juice and some of the pulp. The apple pulp (almost like apple sauce) is then strained and the remaining juice/cider is bottled. That’s the simple, abbreviated version of the process but of course there are a few more steps I might have skipped.

When cider is boiled and reduced, it produces an intense apple flavor you will enjoy! Boiled cider is typically made by reducing apple cider to one fourth it’s original volume. You can boil four cups of cider down to one cup to achieve this ratio. For this recipe we boiled the cider to only half it’s original amount. The more you reduce the cider the more intense the flavor will become. It also thickens to a syrup or molasses consistency. 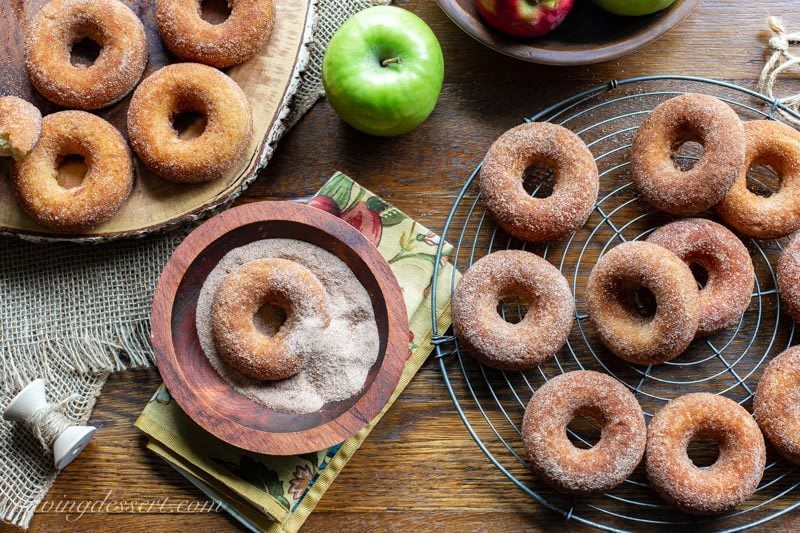 Apple cider is a non-alcoholic beverage not to be confused with hard cider.

Hard cider is pretty great, but probably not for baking doughnuts. Some apple ciders are pasteurized which will extend the shelf life but also mildly affects the sweetness of the cider. Pasteurized cider will work fine in this recipe because we’re cooking it down anyway – no worries. 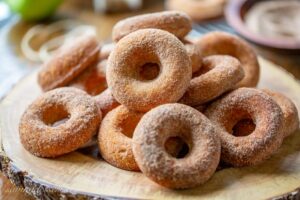 To make the apple cider reduction for this recipe:

To make the doughnuts: 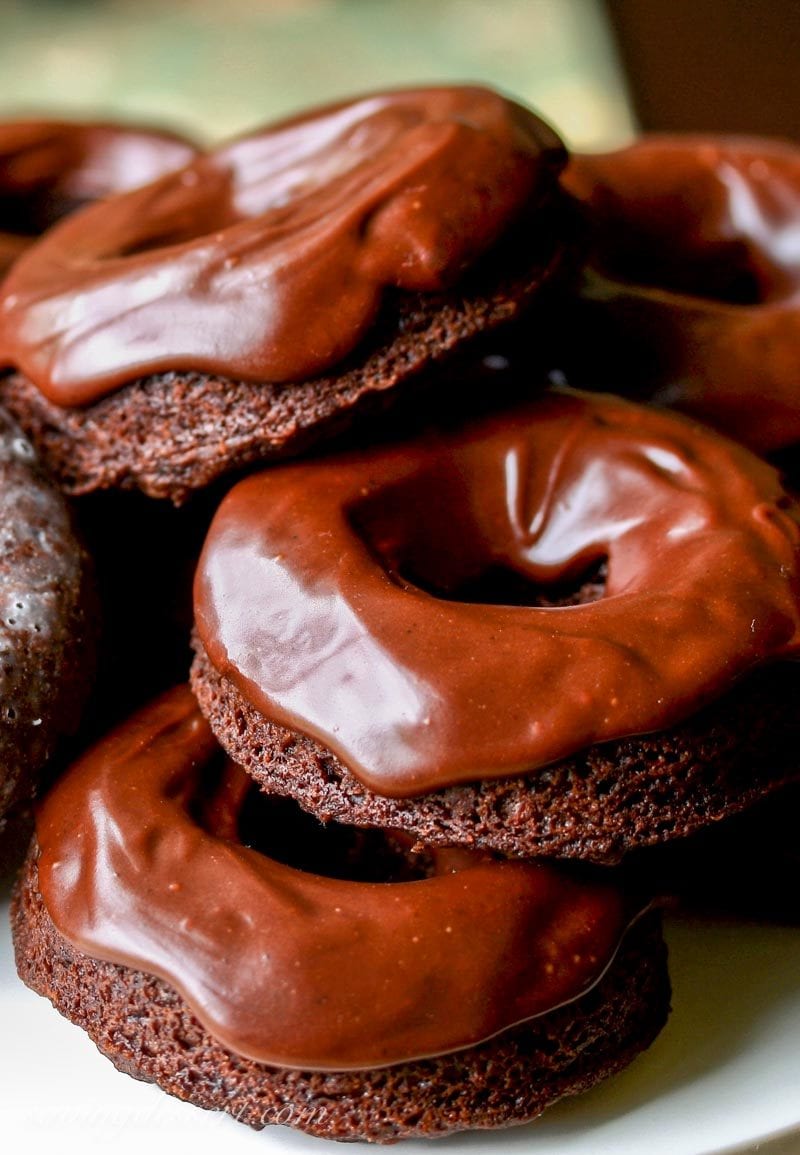 Chocolate Doughnuts – If by chance you really need a chocolate donut, these will absolutely, without a doubt, completely and totally satisfy your craving!  They are like mini-baked cakes with all the trimmings.  Nope … these donuts are not good breakfast food.  Stick with your oatmeal or protein packed smoothie and save these for dessert!   Click HERE to get the recipe for Chocolate Doughnuts. 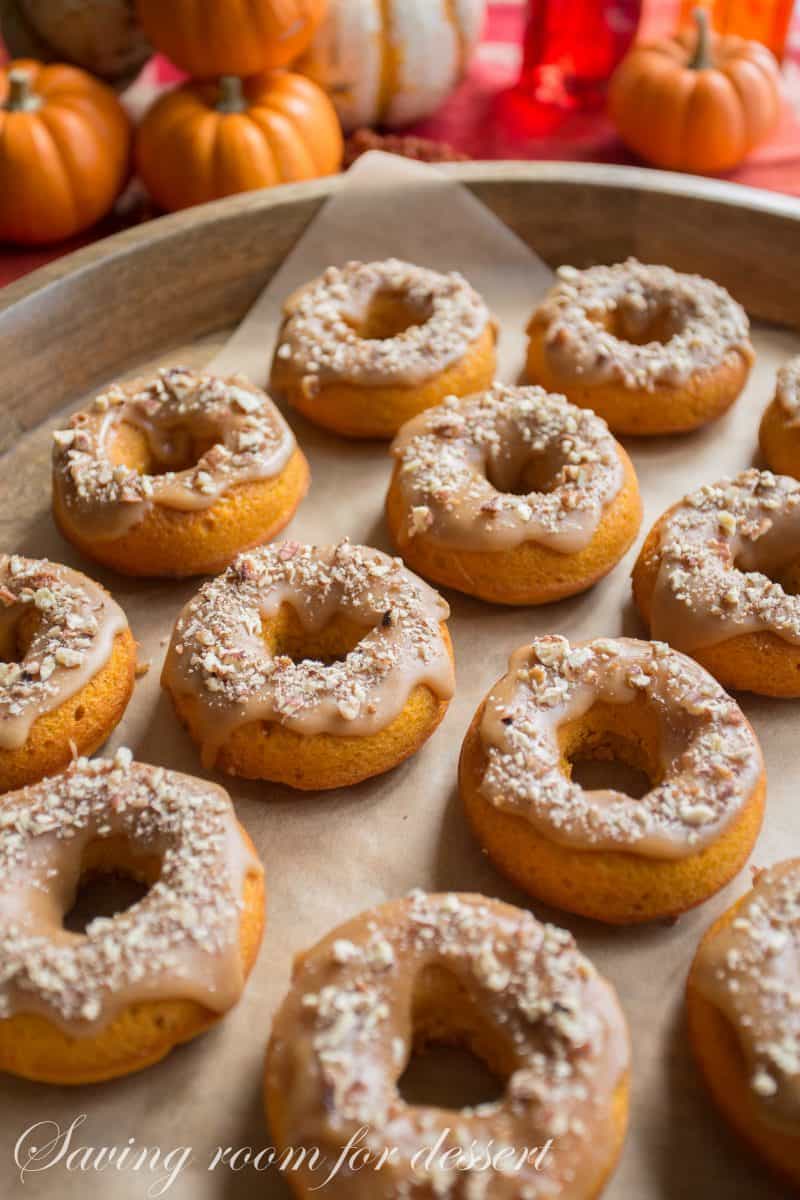 I hope you’ll try these lovely baked Pumpkin Doughnuts with Caramel Icing & Toasted Pecans. They have a wonderful texture and terrific flavor. Topped with caramel icing and toasted chopped pecans – they’re easy to make but hard to stop eating! Click HERE to get the recipe for Baked Pumpkin Doughnuts.

*Saving Room for Dessert is a participant in the Amazon Services LLC Associates Program ~ I earn a small commission, at no additional cost to you, which I use to pay for web hosting and services for this blog. Thanks for supporting SRFD!

Apple cider is a wonderful, seasonal favorite in our house. I tend to bake and cook with it more than drinking it from a glass. If you love apple cider too, check out our recipe for Chicken Fricassee with Apples for a wonderful savory spin on cider. Sue from The View from Great Island knocked it out of the park with this Apple Cider Doughnut Cake. Have you tried it yet? Check out this Apple Cider Mimosa Recipe from Becky at The Cookie Rookie. What a great brunch idea! And finally, don’t miss this post for make your own Slow Cooker Apple Cider from Melissa at Bless this Mess – so easy!
Thanks so much for stopping by! Tricia