With plenty of cinnamon, apple cider and applesauce it’s easy to see why this Apple Cider Donut Cake is a fall favorite!

From the moist, tender crumb to the cinnamon sugar coating, this simple Bundt cake is the perfect balance of textures and flavors.

This simple no-mixer cake is great served with a cup of tea, coffee or our citrus infused hot Apple Cider. Our cake tastes a lot like the apple cider doughnuts you can find at an apple orchard or Farmers Market, only it’s baked, not fried!

I credit Martha Stewart for the inspiration to make an Apple Cider Donut Cake recipe. However, this recipe was adapted from our baked Apple Cider Doughnuts.

For the cake batter:

The apple cider reduction can be made a day or two ahead and refrigerated until needed. Simply boil the apple cider until it’s reduced to 1 cup, or a fourth of its original volume.

If reduced too much, no worries. Simply add more fresh apple cider to make a total of one cup.

2. Next make the cake batter – no mixer required!

In a large bowl whisk together the melted cooled butter, eggs, sugars, applesauce, vanilla and 2/3 cup of the reduced cider. Add the flour mixture and fold together with a spatula until mostly smooth, with a few small lumps.

Pour the batter into a well greased and floured Bundt pan. Bake for 40 to 45 minutes then cool in the pan for 15 minutes more. Invert the cake onto a wire rack set over a baking sheet.

I know it’s hard to resist warm cake, but this one actually improves in flavor and texture if cooled. If sliced warm it crumbles a lot more. So allow the cake to cool at room temperature and then serve.

This cake is so good served with a scoop of our tart and delicious homemade Apple Cider Ice Cream. It’s seriously out of this world delicious!

Boiled or reduced cider is made by boiling the cider until it’s reduced by half or up to one-fourth its’ original volume.

How do you know when it’s reduced enough?

Here’s an easy trick to know when the cider is reduced enough. Pour 1-cup of fresh cider into a deep saucepan. Place a wooden skewer straight down into the pan and mark how far the cider comes up the side of the skewer.

Add all remaining cider to the saucepan and cook as directed. Once reduced, test by placing the skewer back into the saucepan. If it comes to the same level as marked, it’s reduced enough.

This simple method is so much easier than pouring it into a measuring cup every few minutes.

If you reduce the cider a little too much, add more fresh cider to make 1 cup.

Why we love apple cider for fall baking and recipes

I don’t think I’ve ever made anything with apple cider unless we reduced it first. The tart apple flavor is enhanced and almost intense, which in turn makes your baked goods and desserts even more delicious!

Grab a gallon of fresh apple cider next time you’re at the store. I recommend buying unpasteurized if you can find it but pasteurized works well too.

If you have a lot of tiny apple bits floating around after boiling the cider, pour it through a fine mesh sieve and discard any solids.

Cover the cake and store at room temperature for up to 3 days. Or slice the leftover cake and seal in an airtight container. Refrigerate for longer storage.

This cake also freezes very well. Cover in plastic wrap and seal in an airtight container before freezing. Thaw in the refrigerator or microwave each slice for about 30 seconds.

The best pans for making an Apple Cider Donut Cake:

We usually bake our cake in this 12-cup Bundt cake pan from Nordic Ware. However you can bake this same apple cider doughnut cake in a 10-cup Bundt pan, a 13×9-inch baking pan, or two loaf pan.

Don’t over-bake the cake. It’s best taken out of the oven when a toothpick comes out with no wet batter and a few moist crumbs.

While you can use apple cider straight from the jug, the flavor is much better if you use reduced or boiled cider.

Don’t walk away while boiling the cider. The cider bubbles up but will settle down after about 5 minutes of cooking.

For even more flavor brush the top of the cake with cider and sprinkle with cinnamon sugar before removing from the cake pan.

Brush the cake in sections adding the cinnamon sugar mixture as you go before it soaks in and dries. If you feel it needs more cider brushed on, use regular cider or melted butter.

Prevent the cake from sticking to the pan by brushing it with melted butter using a pastry brush. This ensures you’ll cover all the deep crevices before flouring. 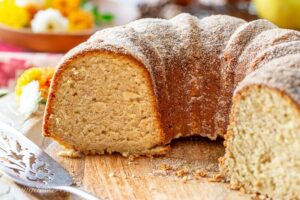 For the cake batter:

To prepare the apple cider reduction:

To prepare the cake batter:

PRO TIP:
Here’s an easy trick to know when the cider is reduced to one cup. Pour 1-cup of the cider into the saucepan. Place a wooden skewer straight down into the pan and mark how far the cider comes up the skewer. Add the remaining cider to the saucepan and cook as directed. Once reduced, you can test by placing the skewer into the pan. If it comes to the same level as marked on the skewer, it’s reduced enough for this recipe. If reduced too much, no worries. Simply add more fresh apple cider to make one cup. Nutritional information is calculated using an ingredient database and should be considered an estimate. In cases where multiple ingredient alternatives are given, the first listed is calculated for nutrition. Garnishes and optional ingredients are not included.

If you find yourself with leftover apple cider, try this Pumpkin Risotto with Cider Caramelized Onions. Oh my it sounds absolutely amazing.