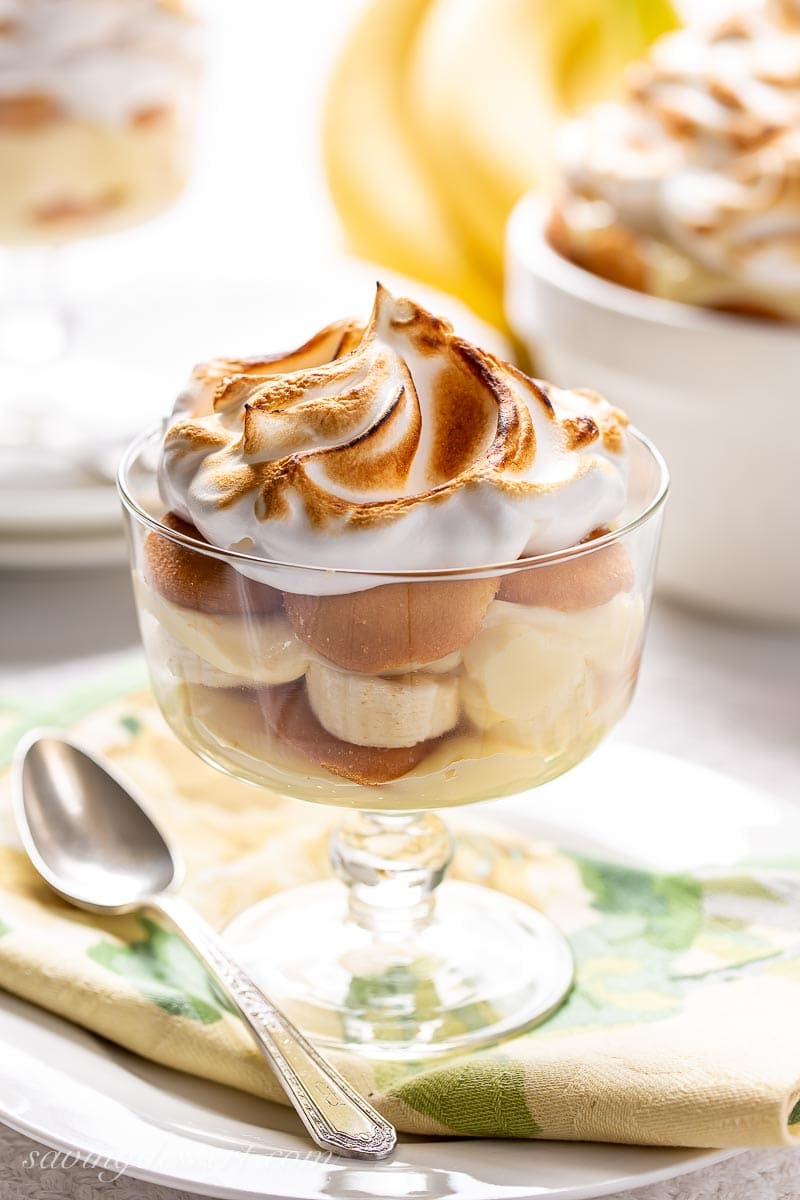 Although popular throughout America, Banana Pudding has deep roots in the South.

There are a few dishes that are ‘must-haves’ in a southern girl’s culinary repertoire. Biscuits, gravy, coleslaw, potato salad, pecan pie and classic banana pudding, to name a few.

Banana pudding is serious business in the south and I’ve met many men that claim this as their all-time favorite dessert. Perhaps it reminds them of home, and their mom, and that’s kind of sweet.

As with most popular recipes you’ll find many opinions as to how it’s best served.

Should Banana Pudding be served warm or cold? Is it best served after melding a few hours so the wafer cookies soften?

What about meringue? Can it be topped with whipped cream instead? Yes, yes, absolutely and yes. 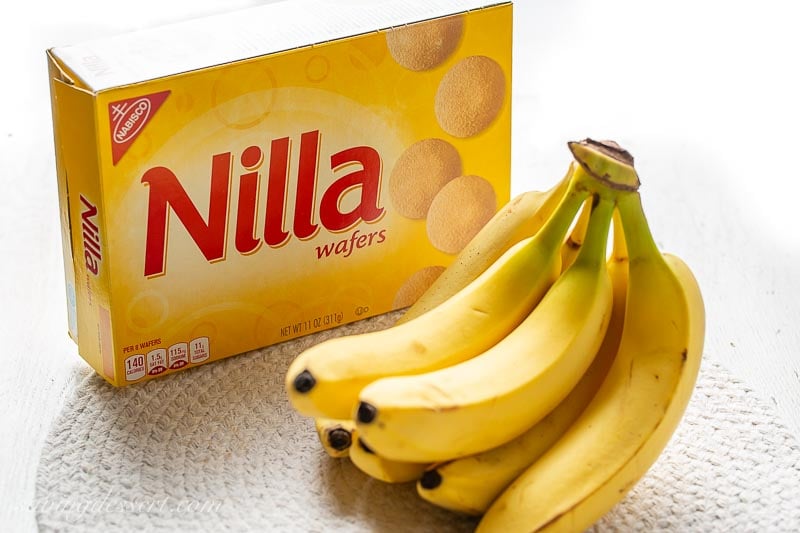 No matter how you serve it, Banana Pudding starts with a few basic ingredients. 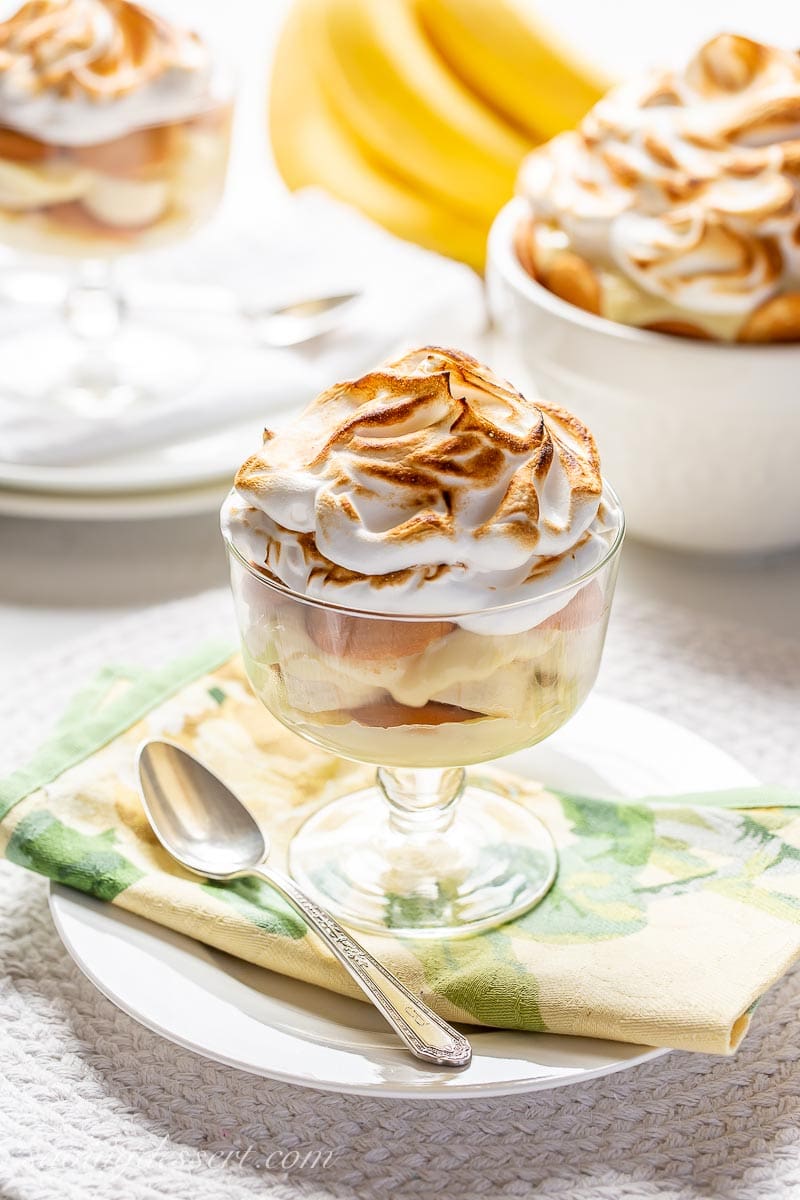 How to make Banana Pudding

Tempering Eggs: For this recipe we temper the egg yolks. All that means is we warm the beaten egg yolks slowly with a little hot milk. Slowly is the name of the game, not too fast or you’ll get lumps. Just a slow drizzle while whisking constantly will do the trick.

Whisk the egg yolks with a little milk and set aside. Put the remaining milk, cornstarch, salt and sweetened condensed milk in a medium saucepan. Heat until almost boiling. Temper the eggs by drizzling about a third of the hot milk into the eggs while whisking.

Pour the tempered eggs into the saucepan and return to the heat. Cook over medium heat until the pudding boils and thickens. Off-heat whisk in the vanilla and butter. Set aside.

TIP: If storing the pudding mixture for later use and assembly, transfer to a large bowl. Press a piece of plastic wrap directly on the entire pudding surface to prevent a film from forming.

Cool and refrigerate until needed. If chilled before using, add a few tablespoons of milk to the pudding to loosen slightly, if desired.

2. Next, prepare the meringue:

Make a simple syrup: Combine water and granulated sugar in a small saucepan. Boil the syrup for 5 minutes. Remove from the heat.

Using an electric mixer, beat the egg whites until frothy. Add the cream of tartar and salt. Continue beating until soft peaks form. With the mixer running on medium-low, carefully drizzle the hot syrup in a slow, steady stream down the inside wall of the mixing bowl into the egg whites.

Add the vanilla and beat until the meringue has cooled a bit and stiff, glossy peaks form.

Layer the bottom of the dish with bananas. Top the bananas with a layer of pudding, then a layer of wafer cookies. Repeat the layers two or three times depending on the size of your dish. Dollop meringue on top and swirl in a decorative pattern.

Brown under the broiler set on low, or use a kitchen culinary cooking torch to toast the meringue. 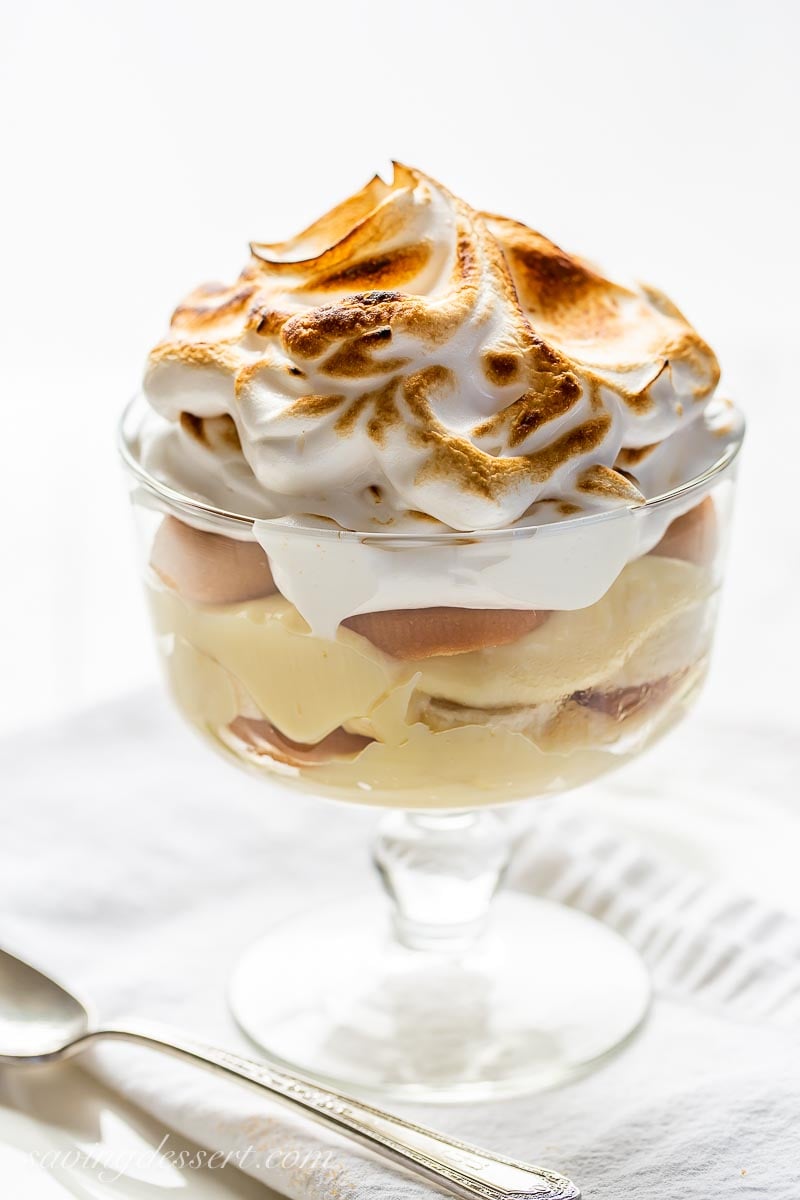 If you’ve never tried using a kitchen torch, it’s really pretty easy. I recommend practicing first, by browning a dollop of meringue on a heat-proof plate or baking sheet before toasting the entire dish.

Be sure to protect your countertops and other non-heat proof items that may be around the area.

Start by swirling the flame over the meringue about 6 to 8 inches away. If the meringue doesn’t start to brown after a few passes, move in a little closer. Read the manufacturer’s instructions for using the torch and enjoy!

You’ll find many uses for a cooking torch.

Sprinkle a little sugar on top of your morning grapefruit. Lightly brûlée the sugar to create a beautiful sweet caramelized crust.

Crème Brûlée is a wonderful dessert you’ll want to try next time you have company. So simple and stunning, and easily made ahead.

Master the torch and serve incredible meringues and desserts!

My husband adores toasted meringues. I often create a double layer just to give him a thrill.

Dollop meringue on top of your dessert or pie, and brown with a kitchen torch. Add another layer of meringue and toast again. Double the toasted meringue flavor = happy husband. 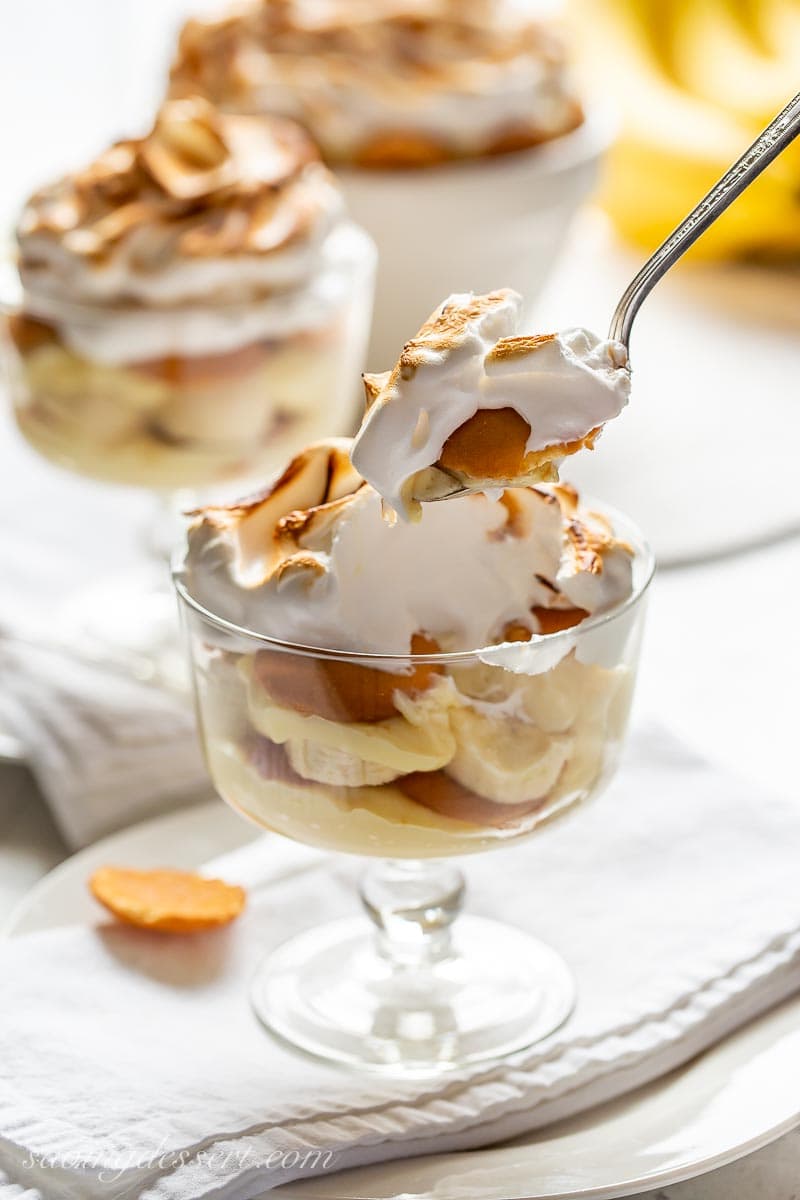 Do you have to top your Banana Pudding with meringue?

There’s no right or wrong way to make Banana Pudding. It can be served warm or cold, with meringue or without. However, some people are very passionate about how it’s best served.

Banana Pudding keeps well for up to three days in the refrigerator and leftovers are terrific. This dessert is easily made ahead and served the next day, making it perfect for entertaining.

The banana slices may turn brown a bit after sitting for a while, but this is not a bad thing. They still taste delicious and add a soft, sweet pillowy bite.

To prevent browning toss the banana slices in a little lemon juice, if desired. However, we don’t mind if the bananas darken, and don’t think you will either. 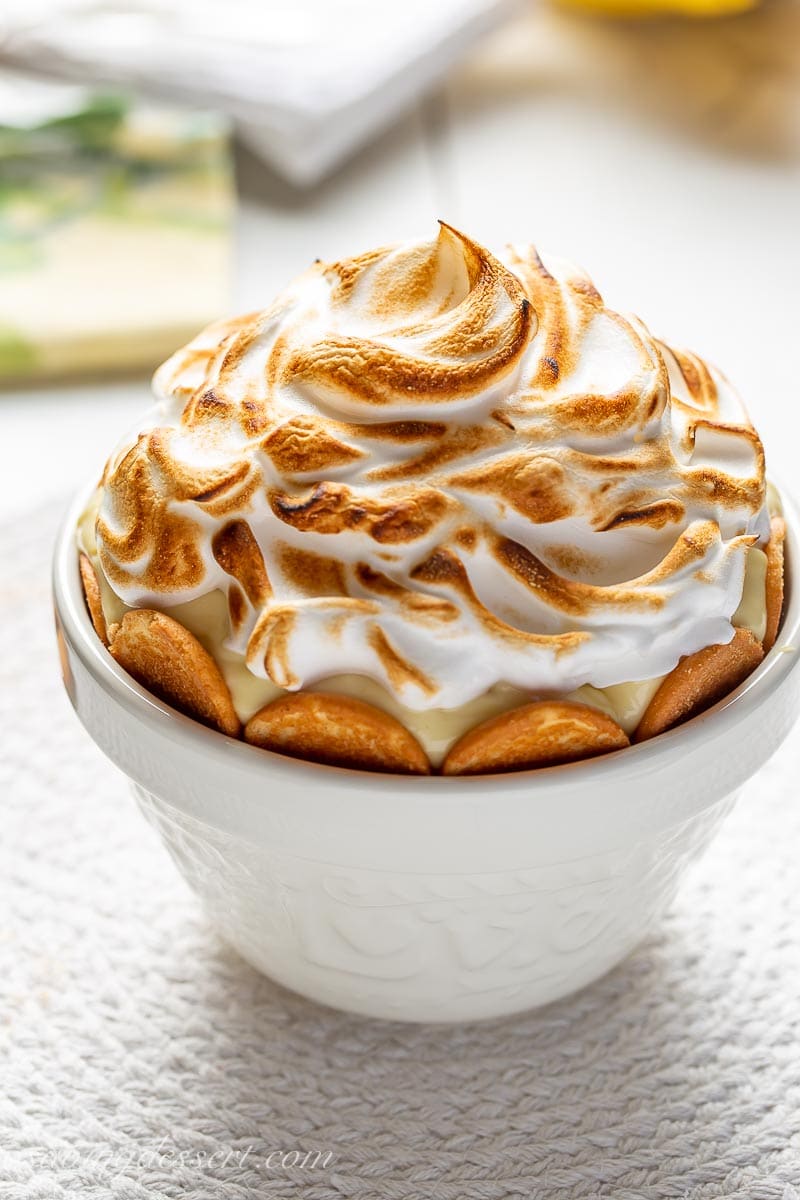 How to serve Banana Pudding

Again, there’s no right or wrong way to serve Banana Pudding. Assemble the pudding in a 13×9-inch baking dish, a mixing bowl, casserole, individual dessert glasses or a trifle bowl. It’s all good!

If you’re browning the meringue in the oven or under the broiler, make sure your dish is oven or broiler-proof. If using a kitchen torch, any decorative dish will do. 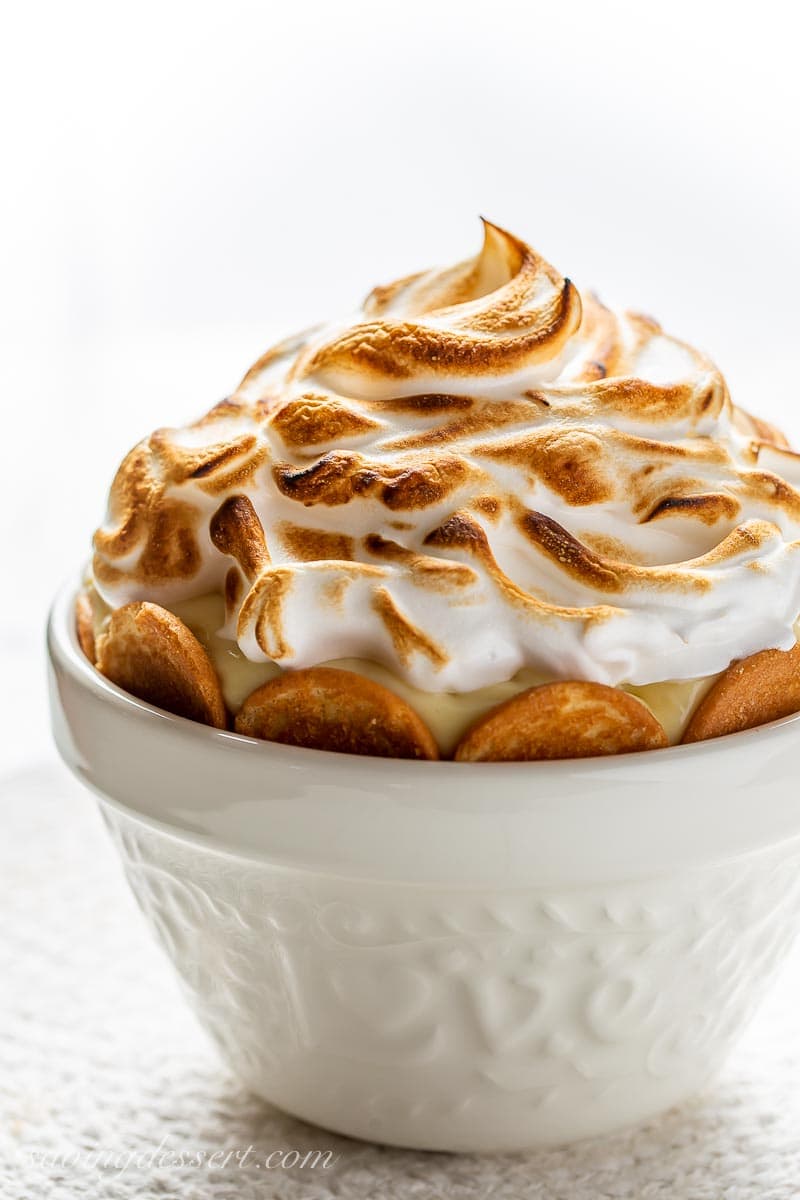 Banana Pudding recipes have been around since the early 1900’s.

It may have been created as an American version of the English Trifle but the early versions did not include wafer cookies. Whoever added cookies to the layers was absolutely brilliant. If you’ve never tried homemade Banana Pudding before, you’re in for a treat! 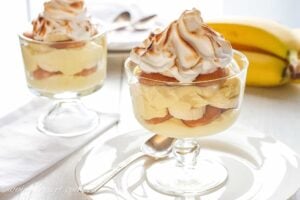 To prepare the pudding:

To prepare the meringue:

To layer the pudding:

** Banana pudding can be assembled in a variety of 2 quart casseroles, trifle bowls or 6 to 8 individual dessert dishes. If browning the meringue in the oven or under the broiler, make sure your dish is oven or broiler-proof. If using a kitchen or culinary torch, any decorative dish will do. Nutrition information is calculated using an ingredient database and should be considered an estimate. When multiple ingredient alternatives are given, the first listed is calculated for nutrition. Garnishes and optional ingredients are not included.