New England Clam Chowder doesn’t have to be difficult to make to be delicious. This recipe brings all the flavor and creaminess without the hassle of finding and cooking hard-shell clams.

We start with bottled clam juice and good quality canned clams easily found in a well stocked grocery store. The end result is a chowder that delivers on flavor and consistency.

This chowder’s not thin and watery nor is it overly thick and floury. It’s creamy, tastes amazing and super easy to make! Add clam chowder to your menu this week!

Thick cut bacon: we use thick sliced, uncured and unflavored bacon for this recipe. Traditional recipes often use salt pork but we find that bacon enriches the flavor with a simple, subtle flavor we love. The bacon dripping are used to sauté the vegetables and flavor the broth.

However, if preferred, skip the bacon and use 1/4 cup of butter instead.

TIP: Start by prepping all the ingredients.

This recipe comes together quickly so have everything chopped, measured, rinsed and drained before starting.

2. Next add onions and celery in the bacon drippings over medium-high heat until tender. Add the garlic and thyme and sauté until fragrant.

3. Add the potatoes, chicken broth, clam juice, black pepper and half the chopped, cooked bacon. Bring to a boil and then simmer until the potatoes are just tender, about 20 minutes.

4. Combine the cornstarch with one cup of half-and-half. Pour into the pot and cook until the chowder thickens.

5. Reduce the heat, stir in the rinsed and drained claims and all remaining half-and-half. Heat until steaming but not boiling. Check the seasoning and add salt if needed.

Can you freeze clam chowder?

You can freeze this chowder, however we don’t recommend it as the half-and-half, seafood and potatoes are all a little fragile.

However, if you plan to freeze leftovers be sure they are completely cooled, well sealed and frozen the same day it’s made. It will keep for up to 3 months if stored properly.

This chowder keeps well in the refrigerator for up to 3 days.

To reheat place the desired amount in a microwave safe bowl and heat on 50% power until steaming. You can also reheat on the stovetop over medium-low heat.

Be careful that you don’t allow the chowder to boil as the clams will become rubbery.

This chowder is best served with plenty of fresh ground black pepper, crumbled bacon and oyster crackers for an authentic touch.

It’s also great served with plain saltine crackers or a hunk of crusty Artisan bread for sopping up all the broth.

This recipe also needs some salt so check before serving to ensure it’s well seasoned.

Can you use fresh clams in this chowder?

Clams spawn during the spring and summer leaving them weak, and off-flavored. While they recover from their spawning phase quickly, they should be avoided from late spring through mid-summer.

If you have access to fresh, in-season clams you’ll need 7 pounds of medium-size hard-shells clams such as littleneck, top neck or small cherrystone clams.

Bring the washed and scrubbed claims to a boil in a large covered soup pot with 3 cups of water. Steam the clams just until open then transfer to a large bowl.

Cool slightly then remove the claims from their shells over a bowl to catch the juice. Discard the shells.

Mince the clams and set aside.

Pour the claim broth into a measuring cup leaving the last bit in the pot to avoid any grainy sediment. Use this broth and claims in place of the chicken broth, clam juice and canned claims in the recipe below.

Continue with the recipe by frying the bacon, adding the vegetables, etc. 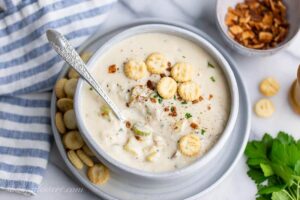 Refrigerate leftovers and reheat gently. Chowder will keep for up to 3 days in the refrigerator. Originally adapted from a recipe on Taste of Home

This hearty recipe comes together in about an hour and serves 6 hungry folks. Made with convenience foods like bottled clam juice and canned clams, it couldn’t be easier to make.

Skip the dairy and make Manhattan Clam Chowder with tomatoes, potatoes with both fresh and canned clams.

For those that can’t eat seafood, we have a wonderful recipe for an ultra-creamy Cheesy Corn and Potato Chowder that everyone loves.

It’s also hard to beat our Buffalo Chicken Chowder and our Salmon Chowder recipes. These are the BEST hearty winter soups sure to please your cold and hungry family.